Radhe: Your Most Wanted Bhai - Salman Khan's Manager Refutes Rumours of Demanding Rs 250 Crore For the Film's Release on OTT Platform (Deets Inside)

Salman Khan's next big release after Dabangg 3 would have been his cop drama Radhe: Your Most Wanted Bhai. Initially set for an Eid 2020 release in May, like all of Salman Khan's films, this one has run into troubled waters, given the on-going nationwide COVID-19 lockdown. 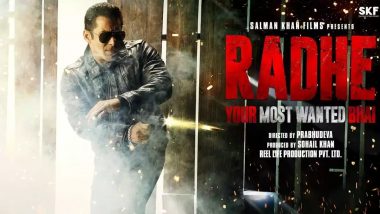 Salman Khan's next big release after Dabangg 3 would have been his cop drama Radhe: Your Most Wanted Bhai. Initially set for an Eid 2020 release in May, like all of Salman Khan's films, this one has run into troubled waters, given the on-going nationwide COVID-19 lockdown. While the film's team and the audiences, everyone was pushing for a May 23, 2020 (Eid) date, a report in a Bollywood portal had mentioned a source close to the film revealing that the film will not release on the scheduled date. Coronavirus Effect: Salman Khan's Radhe: Your Most Wanted Bhai May Not Release on Eid 2020 - Read Details.

Soon followed talk of how Radhe... will be released on the OTT platform given the lockdown. It was being reported that the makers of Radhe... were getting offers from OTT platforms, offering the whopping amounts to release their film online. In fact, a report even mentioned how Salman Khan's manager Jordy Patel had sent out feelers asking for an amount of Rs 250 crores and above. Radhe: Your Most Wanted Bhai: Salman Khan and Disha Patani's Song Not To be Shot in Azerbaijan Due To Coronavirus Scare?.

However, in a conversation with a Bollywood portal, Salman Khan's manager refuted these claims and told Bollywood Hungama, "I haven’t given any figure. All I said was that we are ready to release Radhe - Your Most Wanted Bhai on an OTT platform, once the film is complete and once we evaluate the situation. Only then, we’ll take a call." Akshay Kumar On Laxmmi Bomb Vs Radhe: Salman Khan and I Chatted For a Long Time But Didn't Even Discuss The Clash.

When prodded further on whether he has any figure in his mind or not, Jody said, "We don’t have a figure in mind. The film is not yet complete. How can I quote an amount? We have got songs which are yet to be shot and even a couple of scenes."

He also revealed that he was unsure of the film releasing theatrically, even if the lockdown was to be lifted and theatres started running again. "Would people like to go to watch a film in August? It seems unlikely. So we’ll see what the situation is then and take a call accordingly." Well, we'll have wait and wait and wait for this one Salman Khan flick. All the times that Sallu has played a cope, he has blown our minds and were expect nothing lee from him this time too.

(The above story first appeared on LatestLY on May 07, 2020 02:15 PM IST. For more news and updates on politics, world, sports, entertainment and lifestyle, log on to our website latestly.com).