Rajiv Lakshman Issues an Apology After Deleting His ‘My Girl’ Post With Rhea Chakraborty, Says ‘She Is a Dear Old Friend’

Roadies fame Rajiv Lakshman who had shared a picture of him along with Rhea Chakraborty has deleted the said post from his Instagram. Not just this, the man also issued a statement and apologised for his irresponsible usage of words. Check it out. 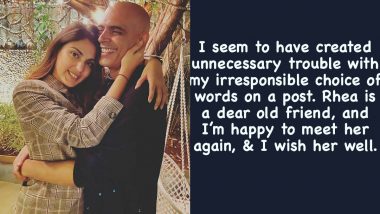 Roadies fame Rajiv Lakshman who had shared a picture of him along with Rhea Chakraborty has deleted the said post from his Instagram. The star had shared a photo with Rhea in which he was seen hugging her and laughingly posing for the camera. He had captioned the post as 'My Girl'. As well all know-how, Rhea has been the talk of the town after Sushant Singh Rajput's untimely demise and so Rajiv's picture invited a lot of hate online. And that is why he deleted it and also disabled his comments. Rajiv Lakshman Posts Pictures With Rhea Chakraborty And Calls Her 'My Girl', Deletes Both Posts Later.

Later, Rajiv also issued an apology where he mentioned that it's his irresponsible usage of words in the post which led to chaos. He also added that Rhea is his dear friend. “I seem to have created unnecessary trouble with my irresponsible choice of words on a post. Rhea is a dear old friend, and I’m happy to meet her again and I wish her well," his statement read. Rhea Chakraborty And Her Brother Showik Spotted As They Step Out For House-Hunting In Mumbai (View Pics).

Reportedly, the photo shared by Rajiv was from Anushka Dandekar's recently held (pre) birthday bash. The party was also attended by other celebs which included Farhan Akhtar, Shibani Dandekar and more. Having said that, earlier to this, Rhea was also spotted hunting for a new abode in the city with her brother. Stay tuned!

(The above story first appeared on LatestLY on Jan 08, 2021 06:57 PM IST. For more news and updates on politics, world, sports, entertainment and lifestyle, log on to our website latestly.com).