Hansal Mehta and Rajkummar Rao have been a hit director-actor duo, and the filmmaker says that the actor gave a new lease to his career. Mehta had helmed films like "Dil Pe Mat Le Yaar!!" and "Woodstock Villa" before joining forces with Rajkummar on the 2013 movie "Shahid". 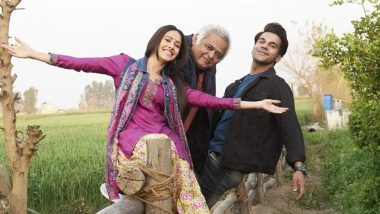 Hansal Mehta and Rajkummar Rao have been a hit director-actor duo, and the filmmaker says that the actor gave a new lease to his career. Mehta had helmed films like "Dil Pe Mat Le Yaar!!" and "Woodstock Villa" before joining forces with Rajkummar on the 2013 movie "Shahid". The two went on to work together in films like "CityLights", "Aligarh" and "Omerta", and the digital project "Bose: Dead/Alive". Heaping praise on the actor, Mehta said: "Rajkummar is perhaps the finest actor of his generation. He has come as somebody who has provided oxygen and given a new lease of life to my career. He is special to me as a human being, friend, brother and a collaborator." The White Tiger First Look: Priyanka Chopra and Rajkummar Rao’s Stills From The Netflix Film Have Already Piqued Our Interest! (View Pics)

The filmmaker feels that the greatest thing that a "director and actor can share is trust. Through that, you can create magic together". The two have teamed again for the upcoming film "Chhalaang", which Mehta calls a "new step forward in our journey". The trailer of the social comedy was unveiled on Saturday. "'Chhalaang' is an exciting part of my film journey. It's my 20th year and what better time to make a film that can entertain and make people laugh. This Diwali, it will bring a smile on people's faces. It comes with a message through entertainment and a delightful cast led by Nushrratt Bharuccha and my muse Rajkummar Rao. He doesn't die or go to a prison in this one. If there will be tears, they will be tears of joy," said Mehta. Chhalaang: Rajkummar Rao Starrer To Premiere On Amazon Prime Video During Diwali 2020?

He added that the joy of making a film is to constantly keep evolving. "You can't be stagnant. It began with version 2.0 with 'Shahid'. 'Chhalaang' is a challenge. It is tough to make people laugh. This is my version 3.0," said Mehta. The film lays emphasis on the importance of sports. "The film reminded me of my PT Sir. PT period used to be fun. It was like a free period. Then Rajkummar's character's transformation reminded me of my coaches. I used to play table tennis. They would say you can do it... achieving the impossible. This film is about transformation of children, how they are transformed internally through sports. It inspired me," he said. Directed by Mehta, "Chhalaang" will premiere on November 13 on Amazon Prime Video.

(The above story first appeared on LatestLY on Oct 17, 2020 05:41 PM IST. For more news and updates on politics, world, sports, entertainment and lifestyle, log on to our website latestly.com).