Tiger has already given his dates for films including Ganapath part 1 and 2, Heropanti 2 and Baaghi 4 and will only be able to work on Rambo after that. Anand, however, does not want to wait this long for the project to kickstart. 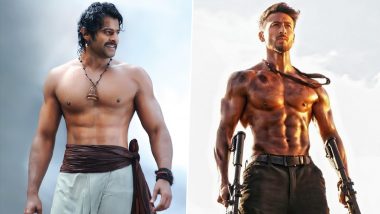 The Hindi remake of Sylvester Stallone's Rambo is one project that Tiger Shroff was eagerly looking forward to. The project has been in the making for the longest time now and director Siddharth Anand is quite keen to finish shooting for the film quickly. The director, who is currently busy with Shah Rukh Khan starrer Pathan, was planning to work on Rambo after he wraps up the SRK film. But with Tiger's busy schedule, his dream to work on the remake looks like a far-fetched dream. Tiger Shroff's Rambo Remake is Not Shelved and Will Go on Floors in January Next Year.

Tiger has already given his dates for films including Ganapath part 1 and 2, Heropanti 2 and Baaghi 4 and will only be able to work on Rambo after that. Anand, however, does not want to wait this long for the project to kickstart and hence is reportedly looking for other actors who can probably replace Tiger in the movie. According to sources, the director is eying to have Baahubali star Prabhas on board for the film.

The source told Bollywood Hungama, "Tiger has not been giving dates for the Rambo remake. He has already allotted dates for Ganapath part 1 and 2, Heropanti 2 and Baaghi 4 which means his dates are almost blocked till next year-end. Siddharth has now approached Prabhas to replace Tiger in the Rambo remake. They are in advanced talks with the superstar and he also has liked the whole concept and idea."

"Plus, the makers feel Prabhas' addition will make it a more pan-India project and give it a different appeal. Now, it needs to be seen if Prabhas signs on the dotted line," added the source. Prabhas has Adipurush and the Nag Ashwin project followed by Salar in his kitty and will wrap up these films before joining Anand on the sets of Rambo. Tiger Shroff's Rambo Remake Sees a Big Change, Director Siddharth Anand Steps Down to Make Way for Rohit Dhawan.

Earlier, reports suggested that Siddharth Anand had decided to step down as the film's director and his good friend and Dishoom director Rohit Dhawan will step in to take the charge. "Rambo is Tiger’s baby and he is kicked about stepping into his idol Stallone’s shoes. After being put on the backburner for a while, the project is being revived with Rohit Dhawan," said a source close to the development in his conversation with Mumbai Mirror. The reason for Siddharth Anand's exit was cited to be SRK's Pathan.

(The above story first appeared on LatestLY on Apr 01, 2021 12:31 PM IST. For more news and updates on politics, world, sports, entertainment and lifestyle, log on to our website latestly.com).