Roohi: Mika Singh Reveals Why He Laughed a Lot While Recording the Song ‘Bhootni’

Mika Singh lent his voice to the song Bhootni in the new Bollywood release Roohi. He says he ended up laughing a lot while recording the track.The song features Rajkummar Rao, Janhvi Kapoor and Varun Sharma. 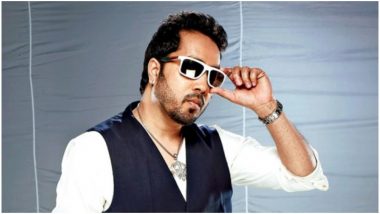 Popular Punjabi singer Mika Singh lent his voice to the song 'Bhootni' in the new Bollywood release Roohi. He says he ended up laughing a lot while recording the track.  "God bless (composers) Sachin-Jigar and (lyricist) Amitabh Bhattacharya ji for making such an awesome song. I was laughing while recording it and I'm waiting to know how listeners react to it. It is a very fresh love song dedicated to a ghost," Mika said. Roohi Box Office Collection Day 5: Rajkummar Rao, Janhvi Kapoor’s Film Witnesses A Satisfactory Hold, Mints Rs 1.35 Cr.

He added: "I'm amazed and glad that the makers thought they should have a song for this situation. I hope the listeners enjoy it as much as we enjoyed recording it."  Bhootni is a comic song that is central to the narrative of the horror-comedy. The song features Rajkummar Rao, Janhvi Kapoor and Varun Sharma and it is about a man (Varun), who is head over heels in love with a ghost (Janhvi). The highlights of the song are Varun trying to woo a ghost and the hilarious lyrics. Mika Singh: Will Get Married Only After Bollywood’s Most Eligible Bachelor Salman Khan Ties the Knot!

Check Out the Video of Song Bhootni Below:

Sachin-Jigar said: "With Bhootni, we knew the impact we wanted to make. Not very often are you tasked to make a song for a situation in which a man is beguiled by a ghost." They added: "It was so much fun recording this song. Mika has delivered Bhootni in his signature care-free style of singing. We're glad to have created such a unique song."

(The above story first appeared on LatestLY on Mar 16, 2021 03:14 PM IST. For more news and updates on politics, world, sports, entertainment and lifestyle, log on to our website latestly.com).