Sadak 2 New Posters Out! Alia Bhatt, Sanjay Dutt And Aditya Roy Kapur Give A Sneak Peek Into This Roller-Coaster Ride 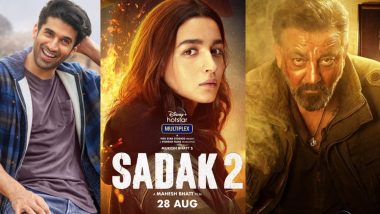 Sadak 2 is one of the many movies which skipped theatres to make a splash on OTT. A sequel to the 1991 movie that gave us nightmares in the form of Maharani played by the prolific actor Sadashiv Amrapurkar, this movie brings Mahesh Bhatt back on the director's chair after two decades. The makers have been teasing us with a few pictures from the movie and now we finally have the character posters. Alia Bhatt and Sanjay Dutt's posters say a lot about their characters in the film while Aditya Roy Kapur has a Yeh Jawaani Hai Deewani vibe. Sadak 2 Will Go For a Straight to OTT Release; 'This is the Only Option Left', Says Producer Mukesh Bhatt

The story of Sadak was about a girl played by Pooja Bhatt, who falls for taxi driver played by Dutt. She was a sex worker at a brothel run by the cruel Maharani. They elope and all hell breaks loose. Sadak 2 is more about a journey from what we have gathered from its previous posters.

Alia's poster has fire, a car, some shrubs, and giant effigy who seems like some kind of a Baba. We wonder if that's the Maharani in this film.

Sanjay Dutt's poster makes it seems clear that the story is a continuation of the first film as Pooja Bhatt's picture is visible behind.

Sadak 2 will premiere on Disney+ Hotstar on August 28. Mukesh Bhatt, the producer of the film, had revealed to PTI that it's the only option left to them now in these COVID-19 times. "People have to protect their families. Today, life is more important," he shared.

(The above story first appeared on LatestLY on Aug 10, 2020 01:35 PM IST. For more news and updates on politics, world, sports, entertainment and lifestyle, log on to our website latestly.com).