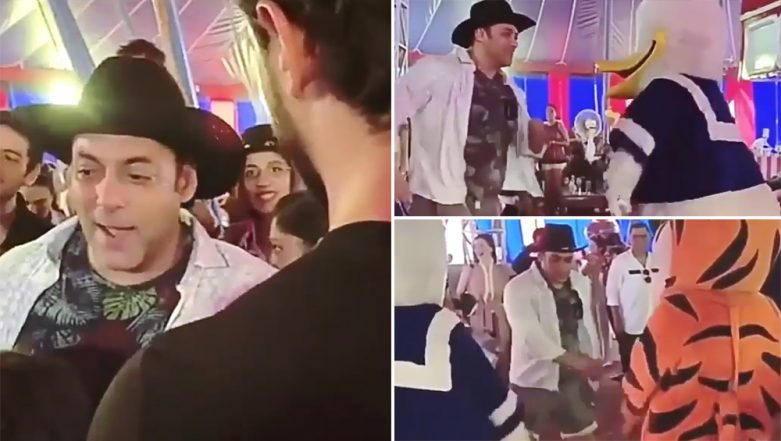 Salman Khan is extremely close to his sister, Arpita Khan Sharma and her son Ahil Sharma is the actor's favorite munchkin. As Ahil turned 3, the Khan clan got together to celebrate the little one's birthday with full gusto. An Avengers themed cake was organized for Ahil and the party looked super fun. Enjoying himself at the bash was Ahil's uncle Salman who seemed to have let himself loose at the kiddie bash. The actor was seen enjoying a dance with a life-sized Donald Duck. Salman was seen having fun and the video is now being shared widely by his fans on social media.

What's even better is that not only is Salman having a great time dancing, he also managed to pick on the trending 'floss' dance. Yes! You can see the 53-year-old flossing along with the Donald Duck. Looking at the venue where the video has been shot, it is clear that Ahil's birthday was one big bash with all the fun arrangements from a Ferris wheel to life-sized Cartoon characters and the revolving cake featuring the Avengers.

It is a rare opportunity to see Salman dancing like no ones watching. The actor surely had loads of fun at his nephew's birthday. We often see Salman and Ahil in cute pictures together and there's no doubt that the little one is the apple of his mama's eye. Salman Khan Comes to Saroj Khan's Rescue after She Runs out of Work, Dabangg 3 Might Bring the Duo Back Together.

On the work front, Salman is all set to be seen in Ali Abbas Zafar's next titled Bharat. The film stars Katrina Kaif along with him and with what we have seen in its teaser, the film is going to be a massive entertainer. Recently, the actor also confirmed that he will be starring in Sanjay Leela Bhansali's next titled Inshallah and we can't wait to know more about this upcoming project which also stars Alia Bhatt in lead.