Sardar Udham: 5 Reasons Why Vicky Kaushal’s Acclaimed Biopic Would Have Never Made It to Oscars 2022 Shortlist Anyway! (LatestLY Exclusive)

Sardar Udham is the biographical account of the last few years of revolutionary Shaheed Udham Singh and his assassination of O'Dwyer in London. Directed by Shoojit Sircar, the movie was a hot favorite to be chosen as India's entry for Oscars 2022, but was overlooked for the Tamil film Koozhangal (Pebbles) 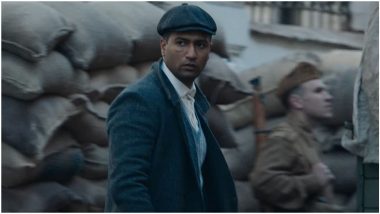 Sardar Udham is not any more India's official entry for Oscars 2022 for Best Film in a Foreign Language, though the makers can still submit the film through their own means. It is PS Vinothraj's Koozhangal that would represent the country for the Academy Awards shortlist. While those who have seen the Tamil film are delighted with this choice, admirers of the Shoojit Sircar film are unhappy that the biopic was not chosen. Sardar Udham: Here’s Why Vicky Kaushal’s Film Was Rejected As India's Official Entry for Oscars 2022.

They can't be blamed for their annoyance. Sardar Udham is a well-made film featuring a career-best performance from Vicky Kaushal and a troubling third act that recalls the horrors of Jallianwala Bagh massacre. The shippers of Sardar Udham are also irked with the reason why the film was overlooked.

One of the jury members overlooking the selection of India's entry movie, told TOI, "Sardar Udham is a well-made production with brilliant cinematography that lives up to international standards. But it is a little lengthy and harps on the Jallianwala Bagh incident. It is an honest effort to make a lavish film on an unsung hero of the Indian freedom struggle. But in the process, it again projects our hatred towards the British. In this era of globalization, it is not fair to hold on to this hatred."

Perhaps the jury member ignored that the last Indian film that made it to the top 5 of Oscars' Foreign Language nominees - Lagaan - also showed the British in a bad light. And considering that England has never apologised for the atrocities it has committed in India, it is not easy to let go off our displeasure. Sardar Udham isn't a hate letter to British, rather it is an ode to an unsung hero, and a reminder that it is the villains who create their enemies through their cruelties - be it in fiction or in real life.

That said, however, there is also no denying that Sardar Udham's chances of making it to the top five weren't anyway that good. Here are five reasons why:

Too Political for the Jury

While the jury hasn't worded their rejection of Sardar Udham right, there is no denying of the political thought to be considered behind selecting a film for the Oscar jury. Lagaan was an exception, because it also worked more as a sports film, and it also shows a couple of good Britishers and a neutral side of the regime, with Captain Russell being allocated the villain status. Sardar Udham, on the other hand, is the kind of the film that makes a scathing but accurate political point against the British regime, but that could also go against the film's chances to make it appealing to the jury. Especially considering it is not made by a white man, whose surname isn't Attenborough or Boyle!

Now, let's get to the more analytical part of why Sardar Udham might not get selected. The movie leaves a lasting impact in the third act, but what comes before, is shaky in its framing. Sardar Udham has powerful scenes, and is unlike any patriotic movies we have seen before, but it is over-long and fractured in its first two acts. And what's more, there have been biopics in the past that follow a similar narrative, like Steve McQueen's Hunger. And Hunger, despite, scoring well at BAFTAs (even when it was critical of the British regime), never made it to the Oscars, even though it boasts of a deeply affecting performance by Michael Fassbender. Sardar Udham Movie Review: Shoojit Sircar’s Biopic, Starring Vicky Kaushal, Fails to Engage With Its Languorous Storytelling.

One of the strong positives that many critics saw in Sardar Udham was how it parallels the events of the film with what is happening in India right now, without being upfront about it. From labelling protesting farmers and students as 'terrorists' to manipulating media to the finale image of wrapped bodies lying on the ground, the film makes a subtle point that the 'free' India today is far from Shaheed Bhagat Singh's dream for his country. But these subtle parallels are more perceptible to the Indian audience (even though most of the RW supporters have also missed the point). While Sardar Udham is a film with a global body language, its intricacies are far more localised.

The biggest factor that goes against Sardar Udham is that it hasn't yet become a talking point in the global circuit to get noticed by the Oscar jury. It has yet to do a festival run, something which Koozhangal did, being screened at the 50th International Film Festival Rotterdam, where it got the Tiger Award at the festival. While the Indian reviews have been overwhelmingly positive, I had gone on Rotten Tomatoes to check what International publications have been saying about Sardar Udham. I found two major reviews there. The review on The Upcoming gave it three stars, but calls it drastically bloated affair. The Guardian review was far more critical, only giving Sardar Udham 2 stars, but praising the direction and production values. While two international reviews aren't enough, they still give an inkling that the Western media hasn't found love for the movie as it got back home.

In the end, it isn't about sending our best film to the Oscars - which in my humble opinion is not Sardar Udham - but to send the film that has the best chance to make it to the final five. Sardar Udham is streaming on Amazon Prime Video.

(The above story first appeared on LatestLY on Oct 27, 2021 10:46 AM IST. For more news and updates on politics, world, sports, entertainment and lifestyle, log on to our website latestly.com).