Satyameva Jayate 2 is a Hindi Masala movie written and directed by Milap Milan Zaveri, and is a sequel to his own 2018 film Satyameva Jayate. The movie has John Abraham in triple role, while it also stars Divya Khosla Kumar, Gautami Kapoor, Harsh Chhaya, Sahil Vaid, and Anup Soni 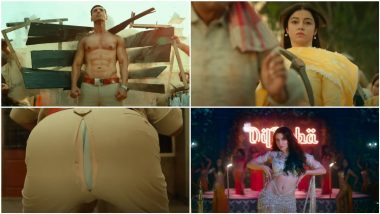 There are movies that make you love the fact that you are in the line of appreciation of cinema. And then there are movies that make you wish that you pack up, offer your resignation and then join a call centre instead. Satyameva Jayate 2 belongs to the latter category. Milap Zaveri's latest can't be even called a film. It is a series of headache-inducing scenes that have been cobbled together with illogical writing and very loud acting. When I say loud, I mean ear-splitting LOUDDDDD! If there is a contest for the worst Hindi movie of 2021, Satyameva Jayate 2 is now much ahead in that race to win that title. Satyameva Jayate 2 Movie Review: Three John Abraham's Get Crammed Into This Terrible Migraine-Packed Masala Movie!

Satyameva Jayate 2 is written and directed by Milap Milan Zaveri, and is a sequel to his own 2018 film Satyameva Jayate. The movie has John Abraham in triple role (and a couple of expressions), while it also stars Divya Khosla Kumar, Gautami Kapoor, Harsh Chhaya, Sahil Vaid, and Anup Soni in the supporting cast. John plays twins, and their dead revolutionary father. One of the twins is Satya, a Home Minister of State and the other is Jay, an ACP, and one of them also masquerades as a serial killer vigilante to murder the corrupt.

John struggles to pull the triple role, the rest of the cast are wasted in badly written roles and the film fumbles badly in trying to be one. It tries to address social ills plaguing the country, but irresponsibly uses them eke cheap cheers and claps from the frontbenchers. And of course the film is replete with WTF moment. Here are 15 of our fave ones in Satyameva Jayate 2! Needless to say, major SPOILERS ahead!

Is That Our PM? 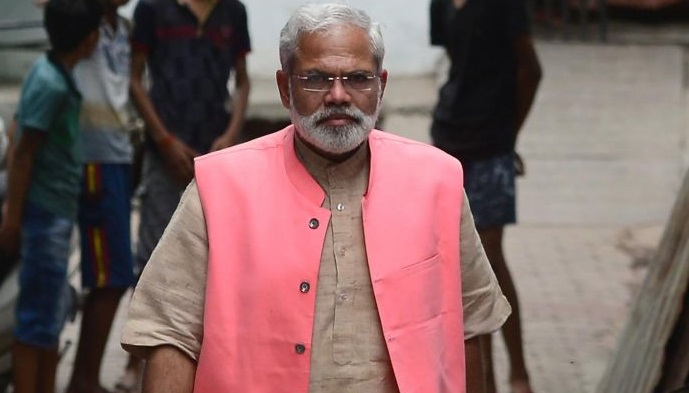 During Satya Aazad's speech in Vidhan Sabha, there is a man sitting behind him who looks suspiciously like our present PM,  with a distracting white beard and that khadi suit. Unfortunately, he is no fan of Satya's anti-corruption bill and is seen clapping the desk when the bill is rejected.

Temple With No Security Guard

The first murder carried out by the vigilante Satya is done in the temple in the middle of the city. Considering how big of a deal temples are in UP and that this is a very popular one seeing the crowds there from an earlier scene during the day, wonder why there is no security? And speaking of security, how did the HM manage to hoodwink his own team to carry out his vigilante activities?

Satya kills one corrupt doctor and the media already begins to label him 'Robin Hood'. Despite the man leaving no kind of statement behind! Why can't it be a plain cold-blooded murder?

John Gets His Own 'Hum Tumhe Itne Ched Karenge..." 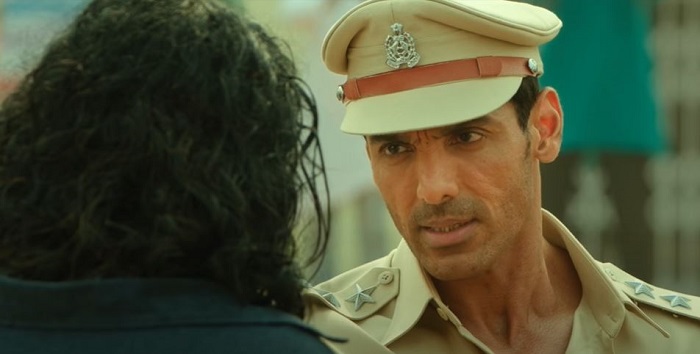 During the (cheesy) intro scene of Jay, after crushing the balls of a molester (why are you here, Rajeev Pillai?), he drops this glorious line, "zindagi bhar piche se moothega kyonki aage se tootega!" In a film filled with plenty of atrocious lines, this one takes the cake.

Hey, are you watching Satyameva Jayate 2 in an empty theatre and finding no one to clap and whistle when John takes his shirt off? Don't worry, the makers have already taken this situation into thought (pity they didn't take the lack of story in thought), and add fake claps and cheers during Jay's intro scene. Reminds us of those old sitcoms that have canned laughter, only that nothing is remotely amusing here. And let's not forget the whole national anthem sequence, just to add another dose of forced patriotism! 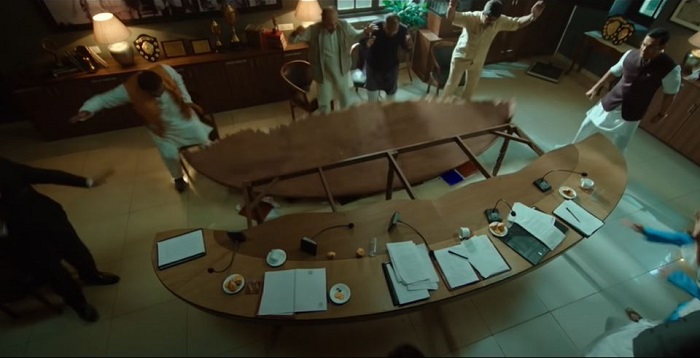 One of the worst tragedies that happened in the country was the kids dying in some of the hospitals due to oxygen shortage. The way this tragedy is included in the film to eke out melodrama is pitiful to say the least!

Not an Item Song! 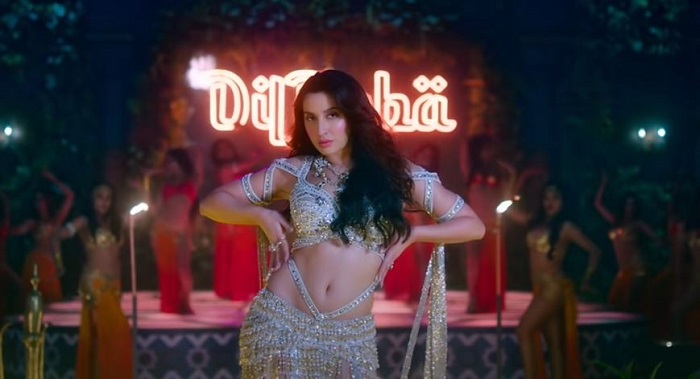 Now that Nora Fatehi has an item song in a John Abraham movie has become a meme. So what does SMJ2 do differently then? In an admittedly rare moment of ingenuity, Zaveri has Nora Fatehi appear as herself shooting for an item song that becomes the movie's item song! Brilliant meta, I must say! Satyameva Jayate 2 Song Kusu Kusu: Nora Fatehi Recalls Her ‘Worst’ Experience on the Sets of the Music Video.

Either John Abraham or the director hates all the inanimate objects. More than the villains, I was worried about the tables, cars, bikes and even Mother Earth in the movie, who all get shattered with the hero(es)' mere punch! This is why we don't need superhero movies in India. You don't need radiation to turn into Hulk and smash things around! Even Batman would think twice before taking out the entire radiator from a car that has just stopped running! Yup, John does that!

Worst Excuse for a Flyover Collapse

There is a scene in the movie where a flyover collapses, killing many of the motorists. The man responsible for the flyover, played by Rituraj, has the weirdest excuse to blame for the collapse. Yes, I know that he is bloody corrupt and irresponsible, but can't he give a better reason than blame a scooter that had three people riding it? 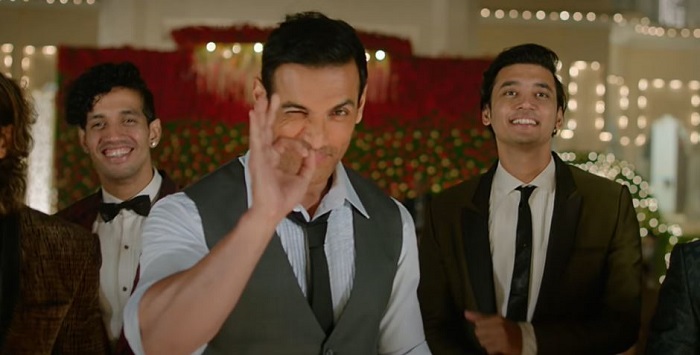 ACP Jay is assigned to protect the above businessman from being targeted by the killer. However, instead of doing his job, Jay dances with his sister-in-law at the wedding reception of the businessman's daughter. We later learn that Jay wasn't very keen to save him, but why didn't anyone pull him up for not doing his task properly and then end up getting him killed?

The interval arrives with the twist that Satya and Jay are hand-in-glove about the whole vigilante business. Fair enough, and it could have been a nice twist, if it was not for the fact that we remember an earlier scene, where Satya calls up Jay by changing his voice and then challenging him! What was that whole scene for, apart from uttering some inane dialogues about National Emblem and Sudarshan chakra and wasting more of our time?

Also, what's the point of Satya and Jay being part of the administrative and law and order system when they have to turn vigilantes to dispense mob justice? What kind of message does SMJ 2 wants to deliver? 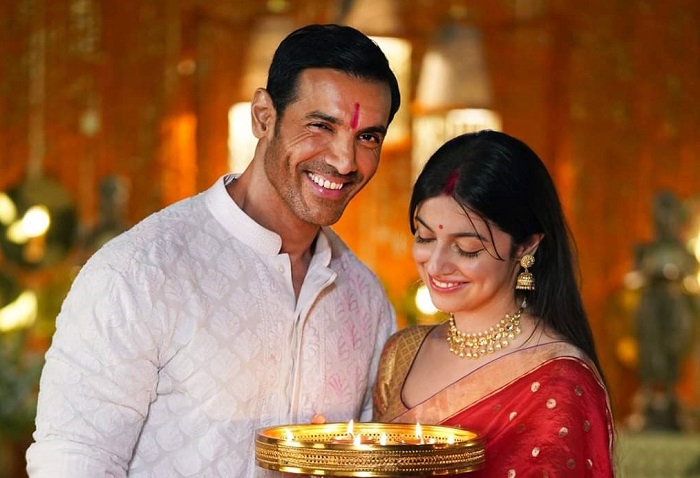 Just because the hero has a double role, doesn't mean that you need to invoke Judwaa! So when Satya is busy killing a villain, Jay had to impersonate his twin brother in front of the latter's wife during the Karwa Chauth ceremony. In a film that has unintentional moments of mirth, this forced placement of humour feels quite outlandish!

The cops in SMJ2 don't beat up criminals in police station, instead they beat up their own. Jay ends up beating his own subordinate for joking about the death of a young boy who was part of a begging ring. One punch ends up splitting the trousers of the police officer, though if that scene leaves you in splits, please do something about your sense of humour!

The HM and ACP Kill a Cop in Front of a Whole Crowd!

Towards the end, SMJ2 throws all pretense in the air and gets both Satya and Jay kill Anup Soni's corrupt cop right in front of a whole crowd, and what's more, they get away with it! Not a single person there records the scene on their smartphones!

The Climax of Satyameva Jayate 2 is the crowning glory of the absurdity that is this movie. From the most obvious villain reveal to night changing into day within the matter of a dialogue, not to mention, Divya Khosla Kumar entering the fray with a plough and a singular expression, everything here is cringe AF. And to top it all, Jay and Satya drag down a helicopter about to fly off merely with their help of their bulging biceps, some gravity and their dead father's spirit. It looks Zaveri saw Captain America's helicopter scene in Civil War, and thought, hey I know how to ruin this terrific scene!

(The above story first appeared on LatestLY on Nov 25, 2021 06:01 PM IST. For more news and updates on politics, world, sports, entertainment and lifestyle, log on to our website latestly.com).