See Anushka Sharma Smiling in the Pic? Read the Caption and You'll Chuckle as Well

Anushka Sharma has shared an adorable picture on her Instagram with her father visible in the reflection. She captioned the pic, "When your dad captures your perfect chai time candid photo and tells you to cut him out of frame but you won't because - daughter." 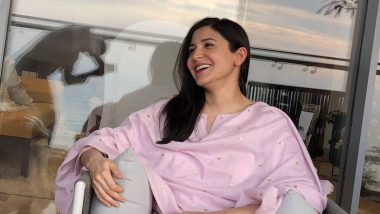 Anushka Sharma has shared an adorable picture on her Instagram. The actress who recently announced her pregnancy is sitting in her home's balcony in the pic. And there's her father too in the frame. Well, sort of. As every child in need, Anushka decided to hand over the camera to her father to click a few pics of her. Her father is visible in the reflection in the window behind Anushka. You can see that Mr Ajay Kumar Sharma is putting in a lot of efforts to click the perfect pic of his daughter - bending his arms in a certain way, tilting the camera to get the best view. Diwali 2020: Preggers Anushka Sharma’s Ethnic Anarkali by Anita Dongre Comes at a Whopping Price of Rs 27000!

Despite the efforts, Anushka's father ended up being in the frame. As per the actress' caption, he asked her to crop her out of the frame, but she didn't. Yes, exactly how it's done when parents click your pic. In a few years, Anushka will be clicking these bad-good pics of her child.

Anushka Sharma captioned the pic, "When your dad captures your perfect chai time candid photo and tells you to cut him out of frame but you won't because - daughter." Anushka Sharma Flaunts Pregnancy Glow in a Beautiful White Ensemble (See Pics).

Anushka and Virat Kohli are expecting their first child in January 2021.

On the work front, Anushka has not signed up a new project to act in since December 2018's Zero, in which she starred alongside Shah Rukh Khan. Although, she has produced a few projects that got a lot of attention. Her web-series, Paatal Lok, was one of the most-talked-about projects this year. She also produced the fantasy-drama, Bulbbul, for Netflix.

(The above story first appeared on LatestLY on Nov 20, 2020 08:47 PM IST. For more news and updates on politics, world, sports, entertainment and lifestyle, log on to our website latestly.com).