Shah Rukh Khan’s #AskSRK Twitter Session: From Being Asked if He Is Scared in India to His Silence on CAA Protests, 5 Questions King Khan Wistfully Chose to Ignore

From the life-lesson that AbRam gave him to asking a fan to wear a helmet while riding a bike, Shah Rukh Khan continued his witty form in the latest #AskSRK sesh. But was silent about others. 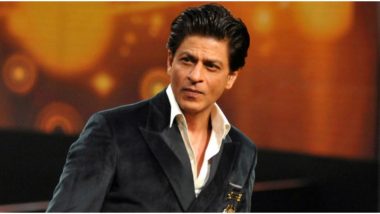 Whenever Bollywood superstar Shah Rukh Khan chose to have an #AskSRK session on Twitter, it is always something to look forward to. Shah Rukh Khan is known for his wit and sense of humour, so he always has something very interesting to say, when facing a question. There is also this curiosity about his next project, that King Khan has not yet announced, after giving 2019 a complete miss. But that was not the only thing Shah Rukh Khan was expected to answer when he held an impromptu #AskSRK session on Twitter on January 22. #AskSRK: Shah Rukh Khan’s Humour Filled Responses to Fans’ Questions on Twitter Will Make You Laugh and Smile!

From the life-lesson that AbRam gave him to asking a fan to wear a helmet while riding a bike, Shah Rukh Khan continued his witty form. He even made a few fans happy just by acknowledging their tweets. But when it came to offering some very substantial answers and information, well, let's just say that the #AskSRK session was another meet-n-greet for fans. Shah Rukh Khan Learnt Something Beautiful From His Son AbRam and the Advice Will Come In Handy When You Are Feeling Blue.

The country is going through burning times right now with the protests against Citizenship Amendment Act (CAA) and National Register of Citizens going on in various parts of the country by the students. There has been violence happening in some of the colleges like Jawaharlal Nehru University (JNU) and Jamia Millia Islamia (JMI). The secular fabric of the country is being torn as we write this. While Bollywood celebs like Sonam Kapoor, Swara Bhasker, Anurag Kashyap, Sidharth Malhotra, Ayushmann Khurrana etc have been vocal about some of these issues, Bollywood biggies have been very quiet on these. Some of them like Akshay Kumar and Ajay Devgn are trying to take a neutral stand, while SRK, Aamir and Salman Khan have been quiet. Naseeruddin Shah Calls Anupam Kher a ‘Clown’; Mocks PM Narendra Modi’s ‘Entire Political Science’ Degree (Watch Video).

So it was natural that King Khan was asked about this in his #AskSRK session. And it was also natural that Shah Rukh Khan may not choose to answer those questions, and several other uncomfortable ones.

Of course, it is Shah Rukh Khan's complete prerogative to answer the questions that he wants to respond to. But we would have been really be awed if he had tackled a couple of controversial ones. Let's look at the five types of questions that King Khan decided to ignore in his #AskSRK session.

Let's start with something milder...

While Shah Rukh Khan did say that he is going to be the one to announce his next when a fan asked him, he didn't say when that was going to happen...

... or what his next project is going to be.

Now off to some very burning ones.

Delhi-based lawyer Prashant Patel Umrao, who is known for his right-wing leanings, asked SRK if the failures of his films are making him 'scared' to be in the country.

Are you feeling scared in Bharat after getting all film flop @iamsrk ?

There is no doubt that this was a dig at Shah Rukh Khan's comments on the rising intolerance in the country that he made in 2016. Patel, however, seems to have forgotten that it was Aamir Khan who had raised the concerns of having fears living in the country over the intolerance and mob-lynching. SRK had only addressed them, but he never said he was scared to live in the country. Anyway, it was the outrage over their statements that have made the Khans go silent over the present issues.

But, while he didn't answer the above tweet, SRK did give back to a fan who tried to troll him for his recent spate of flops.

#3 His Silence over JMU Violence

In the past, Shah Rukh Khan had enrolled himself for a master's degree in Mass Communications at Jamia Millia Islamia, but left it half-way to pursue a career in acting. So when the Delhi police clashed violently with the students in JMU in the aftermath of the anti-CAA protests, many prodded SRK to speak up on this. SRK didn't speak about it then.

And didn't speak about it now too, when his fans who were concerned about his silence, asked him to speak up. Like the below:

How do you face yourself after staying mum on the physical assaults on students of your own alma mater, police brutality, detaining of students and protestors across India, the divisive & religiously discriminative CAA-NRC-NPR policy? #AskSRK https://t.co/WJWkxXt0K8

#4 His Silence over The Protests in the Country

Well, going in the same vein as the above point, SRK was also called out by many during his session for his silence over Kashmir, CAA, NRC and other controversial issues.

When will you speak up Shahrukh?

Are you blind, deaf & heartless?

You made us fall in love with love. There is no fear when there's love.

I'm sure you cant face yourself. #AskSRK

The answer they got was a deafening silence on Twitter.

#5 His Addiction to Cigarettes

We do love SRK, but we can't handle his chain-smoking. Khan had said in the past that he is trying to kick the habit, but he seems to fail at that. During the session, a fan posted a picture of the superstar from the sets of Dance Plus, and asked his idol to drop the habit.

Yesterday I saw your pic from the set of Dance Plus. Cigarette peena chhod do Dev🙏🙏🙏 #AskSRK pic.twitter.com/WjE8eOerUo

While his tweet may not have been deliberately ignored by Shah Rukh Khan, let's hope that the superstar does heed his fan's request and stop this behaviour altogether.

As for why he didn't answer the rest of the questions, maybe you can find the reason in his farewell tweet, as SRK ended the Twitter session.

Need to go now. Nice having a chat with u all. Sum who didn’t get a reply, next time Insha Allah. Sum sounded angry & negative, didn’t want make them angrier with a smartass reply...may u find peace within urselves. And to those taking exam..ALL THE BEST love u all

Well, SRK, we don't really think you would answer any of the above questions in the future sesh as well. But we always look forward to your Twitter sessions just to have another experience of your wit.

(The above story first appeared on LatestLY on Jan 22, 2020 06:26 PM IST. For more news and updates on politics, world, sports, entertainment and lifestyle, log on to our website latestly.com).