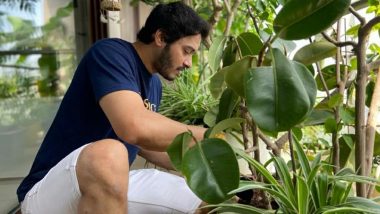 Actor-producer Shreyas Talpade believes one can say a lot with humour, and thats what he aims to do with his projects. The actor has worked on the teleplay "Typecaste", which he says comes with a strong social message. "I personally love the format of a teleplay and that's the reason why I did 'Typecaste'. I think the teleplay is a great experiment where we get rid of the proverbial 'fourth wall'. It almost was like shooting for a film in an enclosed studio. It was quite challenging but I think these formats need to be explored a lot more," Shreyas said. Shreyas Talpade Takes Former Maharashtra CM Devendra Fadnavis’ Help to Set Up an Online Platform for Theatre Artists (Read Deets)

"Typecaste" is an adaptation of a Marathi play called "Pahije Jatiche". Set in the seventies, the play puts spotlight on the caste system. It shows how the context of the story is relevant in presentday India as well. Shreyas plays the role of Mahipat Babruvahan who becomes the first from his caste and village to complete a Master's degree. He wants to become a professor in a particular college, and the play showcases what all he does to make his dream come true. How Did Shreyas Talpade Get Hurt? Here’s What Happened.

"The script is layered and entertaining," said Shreyas. "Typecaste is entertainment with a strong social message and that is the voice of this play. I have always believed you can say a lot with humour and somehow for me, it hits home harder," he added. Talking about his love for the stage, the actor said: "

"From 1990 till 2005, I did close to 2500 shows of different productions on the professional stage. Hindi, Marathi, English, Urdu - such was my love for the stage that I didn't want to miss a single chance to be under the arc lights. Whatever I am today is because of theatre, it grooms you and betters your craft like no other medium. Whatever little appreciation I get in my films today is all because of the theatre." The Zee Theatre teleplay "Typecaste" also stars Atul Mathur, Aaditi Pohankar and Utkarsh Mazumdar.

(The above story first appeared on LatestLY on May 28, 2020 12:38 PM IST. For more news and updates on politics, world, sports, entertainment and lifestyle, log on to our website latestly.com).