Earlier reports in mid-day suggested that the makers of Sooryavanshi are eyeing for the Republic Day weekend to release their cop-movie. The film was initially set for a Diwali 2020 release but the plan was later altered. 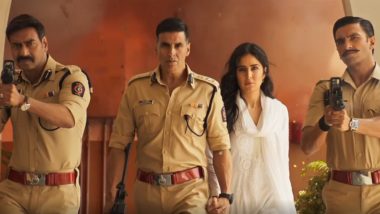 Sooryavanshi starring Akshay Kumar, Katrina Kaif is one of the most anticipated films currently. The film which was supposed to release last year was delayed indefinitely due to the pandemic. Rumours had it that the makers will be opting for an OTT release for the film but Reliance cleared the air and revealed the film will make it to the theatres soon. Ever since then, the fans were eagerly waiting to know the details about the same. Finally, their wait is over as Karan Johar has announced the release date of the film today. Sooryavanshi And '83 To Get A Theatrical Release; Box Office Collection Could See A Jump Of 20% More Than Pre-COVID Days?

Taking it to Twitter, the filmmaker shared an intriguing video, announcing that the film is making its way to the theatres on April 30. The video showed how it has been a year since they gathered together to talk about the film and released the trailer of the film and how things changed post that. We get to see team Sooryavanshi at the trailer launch and some snaps of Mumbai during the lockdown. The video then says that as promised, the film will be coming to the theatres, revealing the release date.

Wishing the entire team all the best for our dhamakedaar film and loads of love to the birthday boy #RohitShetty. It's always a blast to work with you, here's to many more!!! pic.twitter.com/MulV51CaiS

Earlier reports in mid-day suggested that the makers of Sooryavanshi are eyeing for the Republic Day weekend to release their cop-movie. The film was initially set for a Diwali 2020 release but the plan was later altered, despite the Centre giving permission for movie theatres to open from October 15 onwards. "The makers feel it will be an ideal time to release the film, given its theme of patriotism and anti-terrorism," revealed a source. Sooryavanshi Plot LEAKED! Akshay Kumar-Katrina Kaif's Film Set in 90s to Have a Sequel?

Sooryavanshi is the fourth film in Shetty's cop universe after Ajay Devgn's Singham, Singham Returns, and Simmba starring Ranveer Singh. The film is presented by Reliance Entertainment and produced by Rohit Shetty Picturez in association with Dharma Productions and Cape of Good Films. The film will also see Singh and Devgn in cameo appearances.

(The above story first appeared on LatestLY on Mar 14, 2021 11:45 AM IST. For more news and updates on politics, world, sports, entertainment and lifestyle, log on to our website latestly.com).