Half of the year is over and we now enter the first week of July with Indian audiences having some interesting theatrical releases to catch up. The very first of them is the anticipated Marvel movie Thor Love and Thunder which is all set to premiere in the cinema halls near you on July 7. 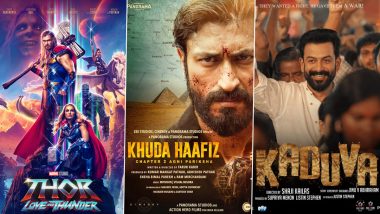 Half of the year is over and we now enter the first week of July with Indian audiences having some interesting theatrical releases to catch up. The very first of them is the anticipated Marvel movie Thor Love and Thunder which is all set to premiere in the cinema halls near you on July 7 (a day before its USA premiere). Speaking of the Bollywood release, Vidyut Jammwal's Khuda Haafiz Chapter II: Agni Pariksha is an action flick that arrives in theatres on July 8. The film was sequel to 2020 film Khuda Hafiz which didn't enjoy a theatrical release. Thor Love and Thunder: Post Credits Scene of Chris Hemsworth's Marvel Film Allegedly Leaked Online, Surprise Character Teased (SPOILER ALERT).

Prithviraj Sukumaran's Kaduva, Jimmy Shergill's Punjabi movie Shareek 2, Pyali, Panni Kutty and yet another Bollywood outing Titu Ambani are some of the silver screen releases of the week. Let's not waste more time and quickly take a look at every theatrical releases of the week.

MCU's next outing Thor Love and Thunder is releasing a day before in India than the USA premiere on July 7. The film marks the return of Chris Hemsworth as Thor and Natalie Portman's Jane Foster. It also features Christian Bale who plays villain Gorr the God Butcher. While you will also get to see several Guardians of the Galaxy characters along with Tessa Thompson's Valkyrie.

Pyali is upcoming Malyalam-language movie featuring Unni Mukundan, Barbie Sharma and George Jacob in lead roles. It is helmed by director duo Babitha Mathew and Rinn A X. The film's story revolves around the bond between a sister and brother who are Kashmiri orphans and live in a slum in Kerala.

Panni Kutty is upcoming Tamil movie featuring amous comedian Yogi Babu and Karunakaran in lead roles. Helmed by Anucharan, the movie is about how two men fight for the possession of a pig for some unknown reason. Panni Kutty translates to piglet and has several comedians playing pivotal roles including well-known Tamil orator and comedian Dindugal Leoni, who will be making a comeback to Tamil cinema after almost 20 years.

Jimmy Shergill and Dev Kharoud’s upcoming Punjabi film Shareek 2 which was earlier scheduled for June 16 release is postponed to July 8 due to Sidhu Moose wala's untimely demise. Other than Jimmy and Dev, Shareek 2 also features Mahie Gill, Guggu Gill, Oshin Brar, and Mukul Dev in key roles. It is helmed by Navaniat Singh and is a sequel to the Jimmy Sheirgill-starrer 2015 release, Shareek.

Rohit Raj Goyal directorial Titu Ambani is a slice-of-life film starring Tushar Pandey and Deepika Singh Goyal in the lead. It tells a tale of two lovers who get married without a hurdle but later face complications in life due to their own aspirations. Titu Ambani also features veteran actors Raghuvir Yadav and Brijendra Kala and is slated for July 8 release.

(The above story first appeared on LatestLY on Jul 05, 2022 03:55 PM IST. For more news and updates on politics, world, sports, entertainment and lifestyle, log on to our website latestly.com).