#Warriors4SSR: Ankita Lokhande Shares a Pic of Sushant Singh Rajput’s Mother, Says ‘Believe You Both Are Together' 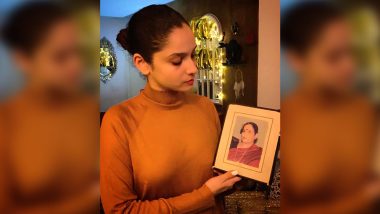 Sushant Singh Rajput’s sudden demise has raised many questions. The actor died by suicide on June 14 at his Bandra apartment in Mumbai. From family to industry members to fans, were shocked to hear about this tragic incident. TV actress Ankita Lokhande and also the ex-girlfriend of late actor Sushant has been extending her complete support to the latter’s family. On August 7, fans of the late actor started trending #Warriors4SSR for which even Ankita, BJP MP Subramanian Swamy, the actor’s sister Shweta Singh Kriti and friend Mahesh Shetty joined the campaign. CBI Probe Ordered In Sushant Singh Rajput Case, Ankita Lokhande Reacts (View Post).

Ankita Lokhande shared a picture of Sushant Singh Rajput’s mother on Instagram and captioned it as, “Believe you both are together #warriors4ssr”. On this post Shweta Singh Kriti commented saying, “Yes they are...  Luv u baby... stay strong.... we hav to fight till we find justice”. There are several near and dear ones and even fans who are waiting Sushant Singh Rajput’s death case to get justice. Sushant Singh Rajput Case: Subramanian Swamy Joins #Warriors4SSR Digital Protest (View Pic).

When it was labelled that Sushant Singh Rajput had been suffering from depression, Ankita Lokhande clarified saying that how he was a jovial person and could never have such negative thoughts. Even Lokhande wanted CBI to take over the investigation and when it happened she expressed her ‘Gratitude’ on social media and stated, ‘The moment we’ve waited for, has finally arrived’.

(The above story first appeared on LatestLY on Aug 08, 2020 09:04 AM IST. For more news and updates on politics, world, sports, entertainment and lifestyle, log on to our website latestly.com).