As we are a few weeks away from the launch of Sacred Games 2, fake audition calls for the third edition come to light 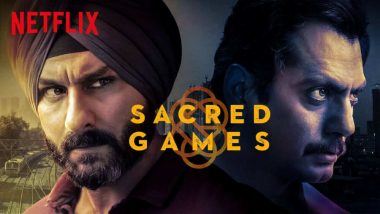 There is no official announcement on Sacred Games 3

Sacred Games, India's first Netflix original series, based on Vikram Chanda's novel by the same name, became extremely popular amongst the masses when it released last year in June. Hence, it was a no brainer that the makers would go for another season, which will be available on Netflix later this month. However, even as we are desperately waiting for Sacred Games 2, the third season of the show has already become a hot topic of discussion. Unfortunately, not for the right reasons.

Turns out there is an audition scam going on in the name of casting new actors for Sacred Games season 3. These fake audition calls were being posted on social media since quite a few days. Fortunately, these posts popped up on the feed of some prominent members of the film fraternity and they decided to take the action immediately. A well-known casting director, Gautam Kishanchandani took to his social media handle and asked everyone to note the phone numbers mentioned in the audition calls and block them. Here’s Why Sacred Games Actor Saif Ali Khan Wanted to Return the Padma Shri Award.

Check out the screenshot of Gautam's post right here: 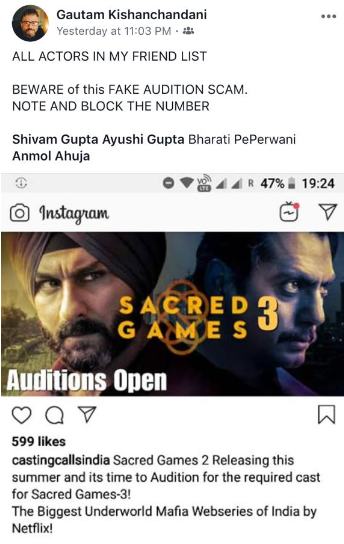 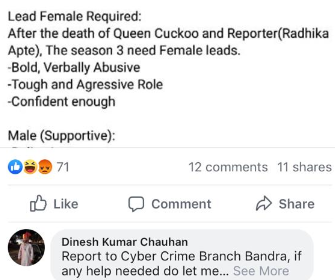 We can also tell you that there has been no official announcement when it comes to the third season of Sacred Games. Talking about the second season, Saif Ali Khan, Nawazuddin Siddiqui and Pankaj Tripathi, who featured in the first season will reprise their roles for Sacred Games 2. Kalki Koechlin and Ranvir Shorey are the new additions to the cast.

Netflix has not announced the date of the launch of Sacred Games 2, but they have dropped enough hints on their social media account indicating that it might be available for streaming later this month.

(The above story first appeared on LatestLY on Jun 12, 2019 03:37 AM IST. For more news and updates on politics, world, sports, entertainment and lifestyle, log on to our website latestly.com).