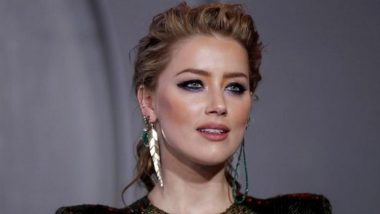 Amber Heard recently took to the witness box in the Johnny Depp vs Sun Newspaper libel case and the actress has been making some explosive accusations against her former husband in the same. The case for the uninitiated has been filed by Depp who is suing the British newspaper for an article published in 2018 that referred to him as "wife-beater". Recently, Heard spoke about facing abuse at the hands of former husband and accused Depp of "punching, kicking, slapping, choking' her.  Amber Heard Takes to the Witness Box in Libel Case, Accuses Johnny Depp of Physical and Verbal Abuse.

Heard denied rumours of seeing Elon Musk or James Franco during the time that she was married to Depp. Heard confirmed it was Franco, 42, riding in an elevator with her of an apartment building she had shared with Depp, 57, in May 2016 after CCTV footage was shown in court. The footage was taken a day after the Aquaman actress said Depp threw a phone at her face. She revealed that the actor was shocked to see her face since it was a day after Depp allegedly threw a phone at her face.

When asked about Elon Musk, Heard told the court, "I was not in contact with Elon until 2016."The Aquaman actress claimed she did not start dating Musk until after her split from Depp on 23 May 2016. Johnny Depp Tells Court Amber Heard Punched Him On the Night He'd Learned He Had Lost $650 Million in Movie Earnings.

The libel case has been getting murkier by the day with new allegations and evidence coming to light. Previously, Heard's former-assistant defended the Depp in court as she called Heard's sexual assault story being "twisted for own use."

(The above story first appeared on LatestLY on Jul 22, 2020 11:48 AM IST. For more news and updates on politics, world, sports, entertainment and lifestyle, log on to our website latestly.com).