Army of the Dead or Dawn of the Dead – Which Is Your Favourite Zack Snyder Zombie Movie? Vote Now 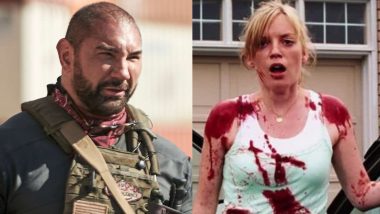 Zack Snyder’s 2021 zombie movie Army of the Dead has been the hot topic of discussion since its release. This film is out on Netflix and moreover has garnered positive reviews from audiences and critics alike. Starring Dave Bautista in the lead role, Army of the Dead has been helmed and penned by Zack Snyder. The flick narrates the story of an epic heist performed by a group of mercenaries who enter into quarantine zones in the middle of a zombie outbreak in Las Vegas. However, besides all this, the movie has also been compared to Synder's Dawn of the Dead. Army Of The Dead: 5 Amazing Zombie Movies of the 21st Century to Check Out Before Zack Snyder’s Film on Netflix.

The comparison was kinda expected as both the films come from the same director and also have zombies as the main premise. But having said that, Dawn of the Dead's storyline is completely different from that of the Army. Also, after the release of AOFD, we are constantly seeing arguments on the internet between fans of the films over which one is better than the other. And so, we thought of conducting a poll and understand who gets the maximum votes- Army of the Dead or Dawn of the Dead. Army of the Dead: Huma Qureshi Gets Her Own Poster, Zack Snyder Reveals Her Character Name.

Army of the Dead Trailer:

Dawn of the Dead Trailer:

FYI, Dawn of the Dead is Zack Snyder’s 2004 zombie movie that's all about a group of survivors who camp out in a shopping mall during a zombie apocalypse. It stars Sarah Polley, Ving Rhames, Jake Weber, and more.

Which Is Your Favourite Zack Snyder Zombie Movie?

Also, we at LatestLY reviewed the latest film, Army of the Dead where our author has mentioned, "Army of The Dead does have its fair share of problems, but watching Dave Bautista run across casino tables while shooting zombies through the head didn’t get boring at all. To read the full review, click here.

(The above story first appeared on LatestLY on May 23, 2021 02:04 PM IST. For more news and updates on politics, world, sports, entertainment and lifestyle, log on to our website latestly.com).