While watching Chip n’ Dale: Rescue Rangers, I had heard chatter about the various cameos that were going to be present in there. Although, never expected to see some that were outside of Disney’s playing field. There are truly some amazing cameos here that go beyond the intellectual properties of just one company. 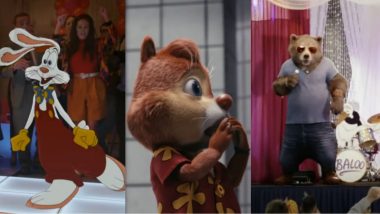 Chip n’ Dale: Rescue Rangers is out on Disney+ Hotstar, and it was a fun ride from start to finish. Being a reboot of the classic animated series of the same name, Chip and Dale see themselves tied in a controversy when one of their old castmates goes missing. What follows is a mystery that is filled with some of Disney’s most iconic IPs and one that honours Chip and Dale like never before. Chip ‘n Dale Rescue Rangers Movie Review: John Mulaney and Andy Samberg’s Film Revels in Its Meta Commentary! (LatestLY Exclusive).

While watching Chip n’ Dale: Rescue Rangers, I had heard chatter about the various cameos that were going to be present in there. Although, never expected to see some that were outside of Disney’s playing field. There are truly some amazing cameos here that go beyond the intellectual properties of just one company, and overall made the film extremely fun to watch. So, let’s rank the 10 best cameos from Chip n’ Dale: Rescue Rangers. Chip n’ Dale Rescue Rangers Trailer: John Mulaney, Andy Samberg and KiKi Layne’s Animated Film To Stream on Disney Plus From May 20! (Watch Video).

Starting off the list with the character who revolutionised the style of blending 2D animation with live-action, we have Roger Rabbit. The character makes a quick appearance in the beginning when dancing with others.

Baloo from The Jungle Book makes a fun appearance here as well. Being at fan convention, Baloo has quite the fun interaction with one of the antagonists of the film. Showing up all dresses in a classy get up and sunglasses, it was quite fun to see him.

Now shifting onto some IPs that Disney doesn’t own, the Cats from the musicals Cats, made a surprise appearance in the film. Fighting in a place called the “Uncanny Valley”, the film took some shots at how jarring their CGI was.

Paul Rudd shows up at one of the fan conventions in the film. Talking about Ant-Man, Rudd originally starts off by saying how his character originally was supposed to be Aunt-Man.

Seth Rogen already was playing a role in the film, but he takes it to the next level here. Playing the role of a Viking Dwarf with some “Uncanny Valley” effects to him, Rogen also reprises his role as Pumbaa from The Lion King. It creates one of the most hilarious scenes in the film.

Mantis from Kung Fu Panda and BOB from Monsters vs Aliens also make an appearance in the same scene alongside Pumbaa. Seeing these characters again after a really long time was satisfying to say the least.

Chip n’ Dale: Rescue Rangers features a Masters of the Universe cameo as well. Both, He-Man and Skeletor can be seen at a convention signing autographs for fans. What’s really fun is that Alan Oppenheimer actually came back to voice Skeletor here.

Disney was able to sneak in a cameo from South Park in here as well. Randy Marsh makes a quick appearance in the bath house scene of the film. Don’t really know how an adult themed character was able to make it into a children’s film, but it was absolutely crazy seeing him in there.

This is the one that made me scratch my head the most. How are you able to get one of your competitors most popular characters to star in one of your films? Batman makes an appearance as he fights ET in a movie that Chip is watching called Batman vs ET. Yeah, you heard that right.

This is the one pop culture reference that will just transcend the bound of what can be done with cameos. Sonic’s original film design ends up making an appearance in the film. Not just a small one, but rather having an actual impact on the plot as well.

Chip n’ Dale: Rescue Rangers honestly was a fun time that ended up being one of the biggest surprises of the year. It's a film that is filled with heart and while watching it you could tell the creators love these characters a lot. If you want to check out something fun and light that will satisfy that nerdgasm itch, then Chip n’ Dale: Rescue Rangers is the watch for you.

(The above story first appeared on LatestLY on May 21, 2022 04:35 PM IST. For more news and updates on politics, world, sports, entertainment and lifestyle, log on to our website latestly.com).