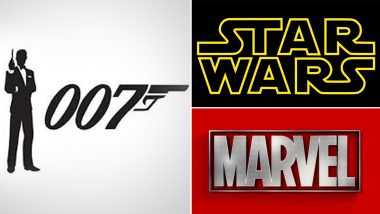 A recent trend being seen is that the films that bring the most box office returns are the ones which are part of huge franchises. Every studio nowadays dreams to have a huge flagship franchise that they can kick start so that they can tell a long overarching story while becoming iconic and bringing in huge box office returns. In Hollywood franchises have become quite the norm, a franchise can be defined by its cast, its story, its quality, its box office returns, and something unique that it’s especially known for. Angry Tom Cruise Funny Memes Go Viral After Mission Impossible 7 Shoot Get Halted Due To A COVID Positive Crew Member.

It’s not easy to run a franchise, as the films keep coming in the quality of them will slowly decrease because it’s hard to maintain and stretch a storyline for so many years. You can only stretch a rubber band for so long until it breaks, and so is the case with movie franchises. So today we are taking a look at seven of the longest running movie franchises that has the maximum number of theatrical releases. Ewan McGregor Reacts to Returning On-Screen With Disney+ Star Wars Series as Obi-Wan Kenobi.

PS: In this list, we have only considered franchises with theatrical releases (Sorry, Puppet Master and Doraemon!) that are still ongoing. Haven't considered series like Star Trek and Alien series, where their future is still in question.

The Fast and The Furious (9 films)

Starting in 2001 with The Fast and The Furious, it was originally about racing and stealing DVD players. Fast forward to today and here we are with F9 shooting a car into the atmosphere. With every entry the series ramps up the absurdity as it defies the laws of physics with critics calling the recent release in the franchise, F9, topping its predecessors in this matter. In the process, the box office returns are also increasing! With two more movies left to go in the Fast Saga, we can’t wait to see where this Vin Diesel-led franchise takes us next.

With the superhero genre being dominated by the MCU, DC in an attempt to rival the success of Marvel started its own slate of films centered on its superheroes. Starting off with Man of Steel in 2013, DC had quite a rough start with its movie universe that continued till 2017's Justice League. Since then, the franchise is seeing better days, even though there is still no direction as to where it wants to go.  DC could still catch up to Marvel’s success as it has an impressive slate of films that are about to be released starting with The Flash next year.

Harry Potter has become the standard for fantasy franchises that deal with magic. Created by JK Rowling, the films are an adaptation of novels of the same name. It’s one of the most successful franchises of all time for it was a huge part of pop culture in the last two decades. While the Harry Potter films are over, the franchise is being continued by the prequel film series, Fantastic Beasts, with its third installment set to release next year.

John Carpenter defined the slasher genre as he created one of the most iconic horror films of all time with Halloween. It’s mainly known for its mysterious antagonist, Michael Myers, a bloodthirsty serial killer who goes around murdering people in a town during Halloween. It even gave birth to the career of Jamie Lee Curtis as she became the scream queen with the character of Laurie Strode. Ever since then Halloween has had multiple sequels and reboots, with the latest in the franchise being directed by David Gordon Green while the story picks up 40 years after the original. The twelfth film in the franchise, Halloween Kills is set to release this October.

Probably one of the most iconic sci-fi franchises of all time, George Lucas changed what we could achieve with visuals back in 1977 as he released Star Wars: A New Hope. It redefined the sci-fi genre with its impressive visuals and storytelling, and then again outdid itself with the release of Star Wars: The Empire Strikes back. With three trilogies and two spin-off movies done, there is more to come for the story of a long time ago in a galaxy far, far away is yet to be over.

The most popular ongoing franchise in Hollywood right now, The MCU in a span of 13 years has cemented itself as a cultural icon for it has become the most profitable franchises of all time. With three phases down and its fourth phase continuing right now, it doesn’t seem like this franchise is going to stop soon. Ever since the release of Iron Man in 2008, it has shot Marvel to the sky in popularity, and every new release of it is met with excitement. Especially 2019’s Avengers: Endgame broke all sorts of records as it went on to become one of the most popular films of all time.

One of most popular spy franchises of all time, James Bond has managed to maintain its popularity for the last 59 years. With multiple actors playing the role of the character, the lastest being Daniel Craig who is finally about to finish his run this year with No Time to Die. He started his turn as James Bond in Casino Royale and quickly went on to become a fan favorite. He since then has starred in three more films with the fourth on its way. Many agree that his turn as the character in Skyfall and Casino Royale was the peak portrayal of Bond on screen. With the rumblings of a new actor being cast in the role of Bond already starting, we can’t wait to see where the story of our favorite spy goes next.

(The above story first appeared on LatestLY on Jun 29, 2021 04:49 PM IST. For more news and updates on politics, world, sports, entertainment and lifestyle, log on to our website latestly.com).