Harry Potter Reunion will get the iconic trio of Harry Potter and his friends Hermione Granger and Ron Weasley back to Hogwarts. The show will definitely be a treat for all Potterheads. Here, check out the early reviews of the show here. 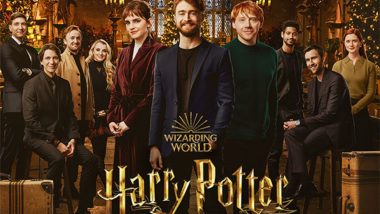 On 20th anniversary of the Harry Potter franchise, the world will witness the reunion of the wizards. As HBO Max is all set to bring our childhood memories back by hosting a reunion episode of the Potter cast. Titled Harry Potter 20th Anniversary: Return to Hogwarts, the special will see iconic trio - Daniel Radcliffe, Emma Watson, Rupert Grint among others under one roof. For the unaware, the reunion will air on January 1, but just in case, you are a Potterhead and want to know deets about it, here check out the early reviews of the show below. Harry Potter 20th Anniversary Reunion - Return to Hogwarts: Streaming Date and Time, Cast, Where to Watch Online in India - All You Need To Know About the HBO Max Special.

Variety: Return to Hogwarts is mostly aiming to envelop fans in a warm and fuzzy blanket of nostalgia. Nonetheless, there are a few revealing moments in which people admit just how overwhelming the entire phenomenon truly was."

The Wall Street Journal: "What’s all wrong is the tone of relentless self-congratulation maintained throughout the nearly two-hour show, the actors’ stroking of each other’s egos and the inflated sense of importance everyone gives the movies—they were important, yes, but it’s tiresome hearing it again and again." Return To Hogwarts Trailer: Daniel Radcliffe, Emma Watson, Rupert Grint’s Harry Potter 20th Anniversary Reunion Will Be an Emotional Ride (Watch Video).

Metro UK: "Daniel, Emma and Rupert have an unbreakable bond – thankfully, not the life-risking, magical kind – that will clearly always remain, having been honorary siblings to one another through the ups and downs of the majority of their lives."

The Telegraph: "The Friends reunion was careful not to take itself too seriously and could be enjoyed even if you were agnostic about that Generation X sitcom. By contrast, Return to Hogwarts is really just for fans."

Well, after reading the above reviews by critics, all we can say is that the Harry Potter reunion is just for fans and might not be your cup of tea. However, you can still give it a try. FYI, the show will air on January 1 on HBO Max in the US, and in India, it will stream on Amazon Prime Video. Stay tuned!

(The above story first appeared on LatestLY on Dec 29, 2021 08:15 PM IST. For more news and updates on politics, world, sports, entertainment and lifestyle, log on to our website latestly.com).