Harry Potter 20th Anniversary Reunion - Return to Hogwarts: Streaming Date and Time, Cast, Where to Watch Online in India - All You Need To Know About the HBO Max Special

Harry Potter fans will be entering the new year in quite a magical way as they will be transported to Hogwarts where the film's cast will reunite for a special on the occasion of the 20th anniversary of the franchise. Read on! 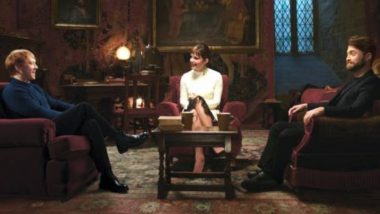 If you happen to be a Harry Potter fan, we know what you are waiting for. As all the Potterheads are excited to binge-watch Harry Potter 20th Anniversary: Return to Hogwarts, which is all set to air next year. On the occasion of the 20th anniversary of the franchise, the makers have arranged a special reunion episode that will see almost the entire original cast of Harry Potter under one roof. Daniel Radcliffe, Emma Watson, Rupert Grint, and others will make their presence felt on the show. However, just in case, you are puzzled about where to watch the Harry Potter reunion in India, then fret not, as we have got you covered. Here are all you the deets you need to know about it. Return To Hogwarts Trailer: Daniel Radcliffe, Emma Watson, Rupert Grint’s Harry Potter 20th Anniversary Reunion Will Be an Emotional Ride (Watch Video).

The Harry Potter reunion special episode which the world is waiting for will stream on January 1, 2022, in India and other countries. Mark the date guys!

Harry Potter Reunion - Where to Watch and Time

Return to Hogwarts will premiere on HBO Max in the US. For the Indian fans of the franchise, they can watch the special on Amazon Prime Video at 2.30 PM IST on the first day of the New Year 2022. Return to Hogwarts: Harry Potter Cast To Reunite for Franchise's 20th Anniversary; To Stream on HBO Max on January 1, 2022 (Watch Video).

So, tell us how excited are you for the Harry Potter Reunion special? Tell us your views in the comment section below. Stay tuned!

(The above story first appeared on LatestLY on Dec 28, 2021 03:32 PM IST. For more news and updates on politics, world, sports, entertainment and lifestyle, log on to our website latestly.com).