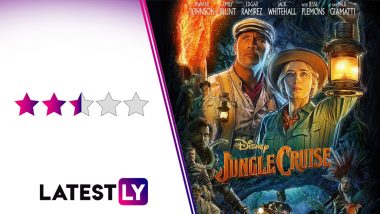 Jungle Cruise Movie Review: Dwayne Johnson and Emily Blunt can be counted among two of the world's most likeable stars. So any movie that pairs them together just ups its likeability factor by a notch. Another notch goes up if the pair strikes up a terrific chemistry that brightens up any dull scene. Add the fantabulous Jesse Plemons, my fave actor since Breaking Bad, in the mix, and make it an adventure film, Jungle Cruise should be an out-and-out fun entertainer. Jungle Cruise: Dwayne Johnson, Emily Blunt’s Adventure Film To Release in India on September 24!

Which it is, on the face of it. Based on a Disney ride by the same name, Jungle Cruise relies on the charms of its two leading stars, plenty of funscapades, an OTT treasure hunt story and use of (CGI) animals to push the plot to help the film sail through. At best, Jungle Cruise helps itself in passing off as a decent fun romp. But it is hard to get rid of the dejavu feeling that attacks you in every scene.

Directed by Jaume Collet-Serra, Jungle Cruise begins in London during World War I. Dr Lily Houghton (Emily Blunt)'s research to find a mythical flower that could cure any ailment is rejected by the all-male committee of the Royal Society. She steals an artifact that could help her find that tree in the rainforests of Amazon.

Joined by her snobby but good-hearted brother MacGregor (Jack Whitehall), Lily goes to Brazil where she hires the services of Frank Wolff (Dwayne Johnson), the captain of a rundown tourist boat who knows every nook and corner of the Amazon Basin, and is heavily in debt. Unknown to Lily, Frank has a secret of his own, that comes to play when they are pursued by a German villain (duh!) Prince Joachim (Jesse Plemons), and a bunch of cursed centuries-old undead Spanish warriors, led by Aguirre (Édgar Ramírez).

If you are new to Hollywood, there is a pretty high chance that you would thoroughly enjoy Jungle Cruise. After all, what's not to enjoy in seeing The Rock jump from branch to branch sword-fighting the undead. Or a playful computer-generated panther that comes in and out of the film, to give it some awww moments. Or Emily Blunt being superstar enough to not be a mere damsel in distress for The Rock to save. Parents would need to be forewarned that they are some creepy visuals in the film, mostly involving snakes that can terrify your kids.

The camaraderie between Johnson, Blunt and Whitehall is quite easygoing, and Plemons has a blast even in his one-dimensional, moustache-twirling pantomime antagonist. Even if the scenery is all greenscreen in most parts, it offers much visual appeal.

So when all the ingredients are of good quality, why didn't the taste of the final product made me go WOW? It's because, everything feels very familiar and very Disneyfied! The trailers were hint enough, and the film doesn't do anything to contradict that opinion. There is a certain The African Queen air in the basic premise of the film, at least in the tok-jhok of Blunt and Johnson. Then of course, we have the first The Mummy film, whose influences loom heavily when it comes to the treasure-hunt plot, the writing around the characters of both the leads (and the brother) and the undead villains. And coming closer to House of M, how can we ignore Pirates of the Caribbean franchise? I am not going to list the many, many similarities that Jungle Cruise shared with the pirate franchise. Say what, have a fun game while watching Jungle Cruise with your friends, and let's see who can come up with the most similarities! Jungle Cruise Review: ‘Directionless and Dull’ or ‘Just a Lot of Fun.’ – Dwayne Johnson, Emily Blunt’s Film Gets Mixed Reactions From Critics.

This lack of originality is exactly what makes Jungle Cruise nothing more than a pleasing film, that is soon forgotten once done. Considering there are plans to convert this into a franchise, I hoped that the makers would have started off on a stronger note, and not on borrowed footing.

The only surprising turn I had in the movie is about the twist around Johnson's character. I admit I was stunned with the revelation, as it came out of nowhere. And yet when you think about it, it doesn't really make much sense. I mean, how come no one in Frank's town notice that abnormality about a man they have been seeing on a daily basis? Also for someone who has stayed in a Brazilian town all his life, how come his American accent is so impeccable?

PS: Whitehall's McGregor is yet another inscrutable instance of a Disney film trying to represent LGBTQ+ community, but without saying loud the G word! Well, small steps at least here, we can say in hopeful reformation!

- The Rock and The Blunt!

Jungle Cruise can pass itself off a decent entertainer, that could be easily savoured by admirers of Johnson and Blunt. It is the over-familiarity of its plot turns that makes the viewing experience not memorable enough.

(The above story first appeared on LatestLY on Sep 24, 2021 10:16 AM IST. For more news and updates on politics, world, sports, entertainment and lifestyle, log on to our website latestly.com).