Katie Holmes appeared to be in a sour mood while grabbing coffee on the heels of her breakup with Emilio Vitolo Jr. The rumours about romance's demise previously started when Vitolo was noticeably absent from Suri's 15th birthday celebration in April. 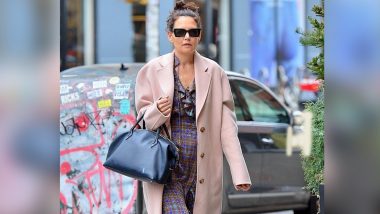 American actor Katie Holmes appeared to be in a sour mood while grabbing coffee on the heels of her breakup with Emilio Vitolo Jr. As per Page Six, the 42-year-old entertainer was spotted out and about in New York City on Thursday in a head-to-toe oversized ensemble. From her huge shades to her parachute-style pants, it appeared that the 'Dawson's Creek' wanted to conceal herself, which didn't work. Katie Holmes Opens Up About Her Quarantine Life with 14-Year-Old Daughter Suri.

The sighting came one day after a representative for Holmes reported the news of the actor's split from Vitolo. The representative told Us Weekly on Thursday, "The pair have parted ways amicably but remain friends." Page Six earlier provided details that Vitolo has effectively been spotted on dating applications. Holmes and the 33-year-old chef evidently flamed out following eight months of dating on account of their feverish timetables and occupied professions. Katie Holmes Sparks Dating Rumours With Chef Emilio Vitolo Jr After Pictures Of the Duo Kissing Go Viral!

"Katie has a ton of big priorities in her day to day existence -- she's a single mom, her girl [Suri] always comes first and things were moving very fast," a source previously told Page Six. Maybe Holmes had a sad behaviour over the fact that she probably will not be eating at Vitolo's adored New York City eatery, Emilio's Ballato, any longer. As announced by Page Six, all through their relationship - the two were shot eating and pressing on the PDA at the celebrity hotspot.

The rumours about romance's demise previously started when Vitolo was noticeably absent from Suri's 15th birthday celebration in April. As reported by Page Six, this was Holmes' first significant relationship since parting from Jamie Foxx in August 2019 following six years together. Holmes married Tom Cruise in 2006, that same year, they welcomed Suri, yet they split in 2012.