The Oprah Winfrey Show had a glorious run since the late 80s, dealing with everything from people coming out on her show, to saving the life of a woman ready to kill herself to Tom Cruise going crazy on the couch to show how much he love Katie Holmes or Aishwarya Rai draping a saree on her. 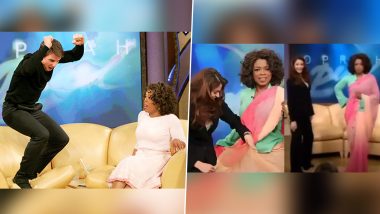 Much before American chat shows started doing bizarre drinking games with their guests to perhaps cater to a social media-obsessed generation, The Oprah Winfrey Show had created history with its stirring episodes. The show started airing in 1986 and ran for 25 seasons. It was all about featuring the people who mattered in the changing socio-economic and pop culture space. It's incredible how much her guests used to put faith in her to come out in public with their best-kept secrets. She even used the forum to diss anyone who didn't get the memo right. Oprah Winfrey, Brad Pitt Team Up to Produce Film Adaptation of Ta-Nehisi Coates’ Best-Selling Novel The Water Dancer

On her birthday today, we thought of going through all those episodes of the Oprah Winfrey Show that might have had a hand in making her show one of the highest-rated daytime talk shows in American television history.

In 1987, Mike Sisco, a gay man and an AIDS patient, created ripples when he decided to swim in a public pool. He spoke to Oprah about the day he did so and how people reacted. “They kind of ran like in those science-fiction movies where Godzilla walks into the street,” Sisco had said. Oprah did a town hall meeting where Mike and the residents were present. It wasn't a great place to be at that time. But 23 years later, when she returned to the town to understand temperament after so many years, there were remorseful people.

The weight-loss that was her 'biggest, fattest, mistake'

Oprah stunned everyone in 1988 when in an episode she wore a size 10 denims, her smallest size so far. For more impact, she also wheeled a cart with animal fat weighing 67 pounds she had lost. It was a brutal process that included fasting. During an interview, she had said, "I had literally starved myself for four months—not a morsel of food—to get into that pair of size 10 Calvin Klein jeans." Although she doesn't consider it to be the greatest moment in her life, the episode apparently also became the highest-ranking one. Weight loss is a sore spot we are conditioned to respond to instinctively.

Ellen comes out to Oprah

Ellen DeGeneres came out to the world about her sexual preference on a TIME magazine cover that screamed, 'Yes, I am Gay.' The brickbats she received for the disclosure prompted Oprah to take up the role of a therapist on Ellen's hit sitcom. See it all here...

The one with Dr. Phil

Oprah met Phil Mcgraw when his consulting firm to prepare for a trial. She found his 'human functioning assessment' quite unique and felt she could help him reach out to a broader audience. Dr Phil has been a regular on the show and is now a very popular face. In one of the episodes, Dr. Phil and Oprah literally saved a woman from killing herself.

Oprah believed in rewarding her loyal fanbases and her live audience. In one such stunning gesture, she gave away 276 Pontiacs to her audience members to celebrate the premiere of her show's 19th season. She had earlier organised a spontaneous day trip to Philadelphia, Disneyland trips, college scholarships, homes for Katrina victims, 2012 VW Beetles and an eight-day trip to Australia in September 2010 for her most loyal viewers. That's such a rarity today!

Tom Cruise made history when he jumped on the couch at the Oprah Winfrey Show to tell everyone how much he loved Katie Holmes. The incident was soon known as the Couch Incident.

The man who tried to trick her

Oprah had also started a Bookclub show where she discussed many of the titles. Soon enough it was seen as the show to be if anyone wanted to be anybody in the book world. She had featured James Frey‘s drug-addiction memoir, A Million Little Pieces in 2005. A year later, it was revealed that it wasn't much of a memoir. Oprah invited Frey on her show and confronted him. But later in 2009, she apparently called him up to apologise for the way she reacted towards him in that episode.

The Oprah Winfrey Show was only five months old when the host went to Forsyth County, Georgia in 1987 to understand from the residents why there was no Black person in the area in over 75 years. That episode was the sign that her chat show will pick up turbulent topics and ask difficult questions to the very people who create those issue.

The one with the Obamas

It was perhaps for the first time that a sitting President and the first lady was interviewed on a chat show. Oprah managed that feat with Barack and Michelle Obama.

Aishwarya Rai Bachchan went on Oprah's show, explained Indian cultures and beliefs to her and also draped a saree on her. The latter had become a rage! Aishwarya graced the show again with her husband Abhishek Bachchan.

The Oprah Winfrey Show has been a gamut of a lot of things from controversies to life-saving moments to career-defining moments. That's why even today, nobody can say 'You get a car!' without being Oprah-tic!

(The above story first appeared on LatestLY on Jan 29, 2021 09:40 AM IST. For more news and updates on politics, world, sports, entertainment and lifestyle, log on to our website latestly.com).