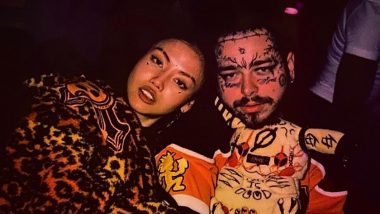 The ongoing pandemic has unfortunately resulted in a lot of deaths, and sadly, it has ended a lot of relationships too. However, the same pandemic has also given birth to a lot of new love stories. We have heard so many stories of people connecting virtually and falling in love with each other. Talking about the new romance, there is something brewing between Post Malone and TikTok star Me Love Me A Lot (MLMA), it seems. At least that's what their fans think. The rumours intensified when MLMA revealed a series of Polaroid pictures of her and Post on August 8 after a fan asked her if she is dating the singer. She also had a parody of Post’s hit song, Rockstar, as the background on her TikTok clip. Now, we know this doesn't mean that this was a confirmation from her. For all we know, it might be her way of making fun of all the recent speculation about them dating.

Needless to say, fans got even more excited. “Aww y’all cute. I hope this means yes cuz u seem sweet [heart emoji] take care of him plz angel,” one fan said in the TikTok’s comment section. “He will be happiest man in the universe,” replied MLMA to that comment. The speculations began earlier this month when MLMA posted a series of pictures on Instagram of them partying together. “I did makeup on [the] cutest face,” the Korean star captioned the pics of Post with ink on his bald head. Rapper Post Malone Gets a New Face Tattoo.

Post has been very secretive about his personal life. It was said that he and Ashlen Diaz were an item from 2015-2018, but there are not many details out there about this relationship. Clearly, Post wanted to keep it this way, as he tweeted, “To my REAL fans I love you to death, to the people trying to dig so f-cking hard to try and get me to leave my girl, y’all ain’t real fans, and it needs to stop,” in February 2019. So, it's obvious, we won't see him addressing the current rumours about him and MLMA. But don't they look good together?

(The above story first appeared on LatestLY on Aug 11, 2020 11:45 AM IST. For more news and updates on politics, world, sports, entertainment and lifestyle, log on to our website latestly.com).