Matt Reeves' The Batman trilogy will reportedly highlight the character's romance with Catwoman. 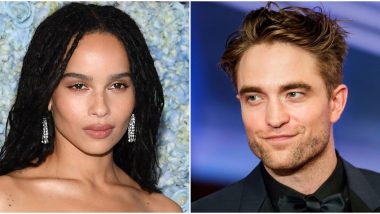 Matt Reeves has planned some exciting storylines for his Batman trilogy with Robert Pattinson. In fact, the filmmaker is not interested in taking the usual route and wants to explore different storylines that weren't explored before. As per a report in We Got This Covered, the trilogy will also include Batman's budding romance with Catwoman and eventually their marriage in coming sequels. Yes, we can see the superhero fans jumping with joy and why shouldn't they? After all, Batman's romance is rarely highlighted in any of the character's previous outings.

As per the report, Pattinson's Batman and Zoe Kravitz's Catwoman will fall in love in the first movie and the sequels will include them getting married and even have a baby eventually. This storyline is pretty familiar with the comic book nerds but if Reeves will stick to the original version and show their rooftop wedding or make some changes with his own addition is yet to be decided. Robert Pattinson's 'The Batman' Director, Matt Reeves Picks His Favourite Batman Movie of All Time.

This would probably be the first time when a Batman movie will focus on the cape crusader's romantic side. Earlier Michael Keaton's Batman Returns showed his romance with Michelle Pfeiffer's Catwoman but her character had a tragic ending in the film's climax. Later Christian Bale's Bruce Wayne was assumed to be in a steady relationship with Anne Hathaway's Selina Kyle towards the end of Nolan's trilogy but it was more like a beautiful ending than a major plot. ‘The Batman’ Director Matt Reeves Teases Fans With the First Glimpse of Robert Pattinson’s Batmobile (View Pics).

It's refreshing to hear Reeves' ideas and his vision for DC's fan-favourite character. Now, let's hope this report doesn't turn out to be a mere rumour.

(The above story first appeared on LatestLY on Apr 13, 2020 10:23 AM IST. For more news and updates on politics, world, sports, entertainment and lifestyle, log on to our website latestly.com).