Stan took to Twitter to post a video where he was seen watching the series and even left a sweet caption along with it. 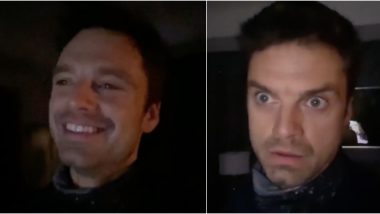 One of the most popular TV series, Gossip Girl completed 13 years since its premiere and guess who was seen celebrating the same? Nope, we are not talking about Blake Lively or Leighton Meester but it is the amazing Sebastian Stan. The Marvel actor once played Carter Baizen on the show and hence the GG alum was seen enjoying catching on the first episode of the show. Stan took to Twitter to post a video where he was seen watching the series and even left a sweet caption along with it. Sebastian Stan: From Gossip Girl to I Tonya - Here's a Look At the Actor's Best Work Outside of MCU.

Taking to Instagram, San shared a video of himself where he was seen catching on the episode. Sharing the same, he captioned it as, "It was the best of times and it was the best of times. Xoxo, Gossip Girl. Premiere 09/19/2007." The actor was seen smiling wide as he caught on the pilot episode of the show which first aired in 2007 on September 19. Towards the end of the video, Sebastian was seen saying, “Well I wasn’t in the pilot, but I wish I was."Penn Badgley Reveals His Ex-Girlfriend and Gossip Girl Co-Star Blake Lively Had Gifted Him His First iPhone.

The show also starred Penn Badgley, Chace Crawford and Ed Westwick in lead roles. The series went on for six seasons and remained a favourite among high-school drama lovers. The series' success set off careers for its lead cast. A reboot of the show is all set to release on HBO Maxx and will be coming in 2021.

(The above story first appeared on LatestLY on Sep 20, 2020 03:18 PM IST. For more news and updates on politics, world, sports, entertainment and lifestyle, log on to our website latestly.com).