Avengers Endgame star Jeremy Renner's ex-wife has alleged that the actor threatened to kill her. This among other allegations is part of Sonni Pacheo's latest filing in their custody case for 6-year-old daughter Ava. 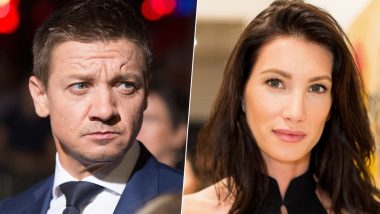 Avengers Endgame star Jeremy Renner's ex-wife has alleged that the actor threatened to kill her. This among other allegations is part of Sonni Pacheo's latest filing in their custody case for 6-year-old daughter Ava. She filed multiple claims against Renner, alleging he threatened to kill her and once he put a gun in his own mouth and shot into the ceiling while their daughter was in her room, according to court documents obtained by TMZ, cited People. Avengers Endgame Actor Jeremy Renner Shuts His Official Fan Interactive App Due to Trolls

Even more, the actor's ex-wife accused him of drug abuse and leaving behind cocaine in the bathroom at a place easily reachable by Ava. However, Renner's attorney has argued that these allegations are "one-sided" and it is a "matter for the court to decide.""The well-being of his daughter Ava has always been and continues to be the primary focus for Jeremy. This is a matter for the court to decide. It's important to note the dramatizations made in Sonni's declaration are a one-sided account made with a specific goal in mind," the lawyer said in a statement. Marvel Actor Jeremy Renner Has A Polite Petition To Bring Back Spider-Man From Sony – View Tweet.

The estranged couple walked down the aisle five years back in 2014, and later that year, Pacheco had filed for divorce. The Canadian actress cited "irreconcilable differences" as the reason for the split. Earlier, in September, she filed for a request for sole legal and physical custody of their 6-year old with the Superior Court of California, County of Los Angeles. A hearing is scheduled to be held on November 7, and the couple was also ordered to attend child custody mediation.When they finalised their split, Renner and Pacheo agreed for shared custody with the actor paying child support to the tune of USD 13,000 per month as well as 5 per cent of the excess if he makes over USD 2.3 million a year.

Last year in April, Renner even became an "extraordinary high-income earner" with USD 11.4 million as his Marvel film income. So, he was set to pay USD 292,000 as additional child support that year.