Sweet Tooth: From Doom Patrol to iZombie, 5 Obscure DC Properties That Got Screen Adaptations Before This Netflix Series

This Friday Sweet Tooth is dropping on Netflix, a series created by Jeff Lemire which is based on the DC comic book of the same name. It follows the character of a sheltered hybrid deer-boy named Gus who unexpectedly befriends a wandering loner named Jepperd. 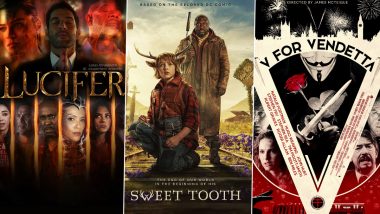 This Friday, Sweet Tooth is dropping on Netflix. It is a series created by Jeff Lemire which is based on the DC comic book of the same name. Sweet Tooth follows the character of a sheltered hybrid deer-boy named Gus who unexpectedly befriends a wandering loner named Jepperd. Together they set out on an extraordinary adventure across what is left of America in search of answers of Gus’ origins and the true meaning of home. OTT Releases of The Week: Manoj Bajpayee’s The Family Man Season 2 on Amazon Prime Video, Christian Convery’s Sweet Tooth on Netflix, Patrick Wilson’s The Conjuring 3 on HBO Max and More.

It’s great to see DC tackle some of its more smaller and obscure and smaller properties because there are some really great stories to be told over there. So in anticipation of Sweet Tooth’s release, we are taking a look at five obscure DC properties that got cinematic interpretations. Sweet Tooth Trailer: Hybrids Are On The Run From Humans But A Boy With Horns Hopes For A Safe World (Watch Video).

Lucifer is an urban fantasy show developed by Tom Kapinos, which is based on the DC comic character created by Neil Gaiman and taken from his comic series of The Sandman. Lucifer later on would become the protagonist of his own spin-off comic published by DC comics under its imprint Vertigo. Lucifer follows the story of Lucifer Morningstar played by Tom Ellis, the Devil who abandons hell for Los Angeles and owns his own nightclub and becomes a consultant to the Los Angeles Police Department. The series is streaming on Netflix.

This supernatural procedural crime drama developed by Rob Thomas and Diane Ruggiero-Wright and is a loose adaptation of the comic book series of the same name published by DC comics under their imprint, Vertigo. The series ran for five seasons and follows the adventures of a doctor turned zombie named Olivia “Liv” Moore, who is a Seattle Police medical examiner who solves crimes by eating the victims brains and temporarily inheriting their memories and personalities. iZombie is streaming on Netflix

Developed by Jeremy Carver, Doom Patrol is based on the DC comics superhero team of the same name. It features heroes like Crazy Jane, Rita Farr, The Negative Man, Robotman and Cyborg who was added to the team just for the show. It follows these unlikely heroes who received their powers through tragic circumstances and are generally shunned by society. They are then taken in by the medical doctor The Chief, who treats them and protects them from the outside world. The series embraces the weirdness of the comic and is just a great watch in general. It is streaming on Amazon Prime Video.

V for Vendetta is a dystopian thriller directed by James McTeigue and based on the DC limited series of the same name written by Alan Moore and David Lloyd. Its set in an alternative future where a Nordic supremacist and neo fascist totalitarian has subjugated the united kingdom, it focuses on V, an anarchist and masked freedom fighter who attempts to ignite a revolution. While the comic was popular among the comic circle, general knowledge didn’t know much about it until its release.

Directed by Zack Snyder, Watchmen is based on the DC comic series of the same name written by Alan Moore and Dave Gibbons. The film is set in an alternate history year 1985 at the height of the Cold War between The United States and the Soviet Union, as a group of mostly retired superheroes investigates the murder of their own and discover a deadly conspiracy. Like V for Vendetta, comic fans knew about Watchmen, but it only got popular after the film's release. Watchmen is available on Netflix. There is also a highly acclaimed series based on the comics that is available on Disney+ Hotstar.

(The above story first appeared on LatestLY on Jun 02, 2021 09:45 PM IST. For more news and updates on politics, world, sports, entertainment and lifestyle, log on to our website latestly.com).