Tatiana Maslany Is Not She-Hulk, Actress Denies Being Cast As MCU's Next Superhero 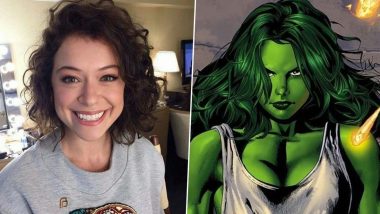 Tatiana Maslany is NOT cast in the titular role in She-Hulk. The Orphan Black star has denied being connected to the project, which comes as a shocker. When the news broke on September 18, not only fans celebrated but even Mark Ruffalo - who plays Hulk in the MCU congratulated the actress, which in hindsight looks so weird. "Welcome to the family, cuz," he wrote, sharing the news article. Well, he live-streamed 15 minutes of Thor: Ragnarok accidentally, so we would not be surprised if the studio is not willing to keep him in the loop with such big news. Tatiana Maslany is She-Hulk: Mark Ruffalo Welcomes the Canadian Actress after Marvel Signs Her for the Disney+ Series.

In an interview with Regina Leader-Post recently, Tatiana was asked about being cast in She-Hulk. The actress said, "That actually isn’t a real thing and it’s like a press release that’s gotten out of hand. It’s totally not — I’ve been connected to these things in the past and press has gotten onto it, but it’s not actually a thing, unfortunately." Marvel's She-Hulk: Everything You Need to Know About Stan Lee’s Iconic Character.

It is funny that in one month, nor the studio, neither the actress cared enough about fans to deny the speculations and squash the rumours. Although, it has been a trend for Marvel actors to deny casting until the official announcement comes through the studio. Paul Rudd denied being cast as Ant-Man. Not to forget that, Russo Brothers denied that Avengers 4 was subtitled Endgame.

She-Hulk is an upcoming web-series that will debut on Disney+. It is a part of MCU's phase 4, where series like WandaVision, The Falcon and the Winter Soldier, Loki, Ms Marvel is also taking place.

(The above story first appeared on LatestLY on Oct 16, 2020 04:50 PM IST. For more news and updates on politics, world, sports, entertainment and lifestyle, log on to our website latestly.com).