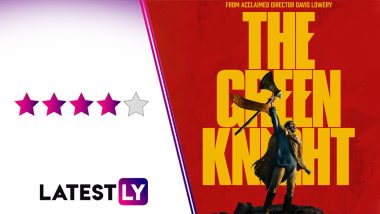 The Green Knight Movie Review: I finished The Green Knight and for a bit I sat there taking in what I just experienced. With movies like The Green Knight, you need to take a minute to understand all the story beats and what certain scenes meant. The Green Knight definitely works as a great story about trying to achieve greatness and I think it’s the performance of Dev Patel that actually compliments it so well. The Green Knight Review: Critics Call Dev Patel’s Arthurian Tale a Visual Masterpiece!

The Green Knight follows Young Gawain, the reckless nephew of King Arthur. It is when challenged to a game by the mysterious Green Knight, does he set out on a journey to find courage and honor. David Lowery crafts here perhaps what is possibly one of the best Arthurian tales we have had in a while. While many adaptations of Arthurian folklore focus on being huge blockbusters and heroic escapades, The Green Knight rather takes a more somber and pensive approach to its source material. It leans very heavily into what makes the Arthurian world so unique and wacky for the lack of a better term. It feels medieval and like a big production, but has the right amount of fantastical elements to it where the world feels magical.

The real star here is Dev Patel. He showcases some serious acting chops that are probably never seen before by him. The portrayal of Sir Gawain is what matters to this story, and Patel is the best vessel to deliver this character. In a story of finding courage and honor, Patel shows massive heart in Gawain’s struggles. Knowing the massive goal that lies ahead of him, Gawain is a character that grows on you overtime the film goes. He takes a massive risk in undertaking this challenge, and his recklessness is seen immediately. In order to achieve honour and glory, he ends up biting off more than he can chew. While you think his story might be heading in a certain direction, it really doesn’t. Rather The Green Knight focuses on subverting your expectations and delivering an ending that goes against the norms of a story like this. Dev Patel Birthday Special: Five Roles Of The Actor That Prove He Is A Versatile Performer.

While talking about Dev Patel, I also have to give credit to Ralph Ineson for playing the Green Knight too. While his screen time isn’t that substantial, his presence can be felt in each and every frame. His commanding presence in the first scene coupled along with his captivating look, just makes him a really convincing character. He has this aura around him that’s makes the audience want to see him more, but thankfully he isn’t over-utilised. So whenever he appears on screen, it’s a treat. Throughout the movie also, we meet quite a few colourful characters that have their own thematic meaning to the story and don’t come off as redundant.

The cinematography here is another star that shines bright. Capturing wide shots of mountains, streams and castles, at times I myself mistook it for a nature documentary. I don’t want to spoil much here, but there are certain surprises too, that when you see them, will sell you on the scale of it. It’s backed up by a captivating and a suspenseful soundtrack that heightens the tension of certain scenes.

If I had one nitpick about The Green Knight, it has to be that some scenes might drag for a minute too long. The movie clocks in somewhere more than 120 minutes, but it could have been a bit shorter. I just think that it compromises the pace and it results it in being longer than it actually should have been.

The Green Knight is a marvelous feat in storytelling that goes above and beyond than it’s source material. It’s a story about not achieving greatness, but just being good and honest even if the odds are stacked against you. It helps in delivering a message that gives you one of the most powerful final frames of this year. All in all please watch The Green Knight, it’s great.

(The above story first appeared on LatestLY on Aug 27, 2021 08:28 PM IST. For more news and updates on politics, world, sports, entertainment and lifestyle, log on to our website latestly.com).