The Suicide Squad "Rain" Trailer: From 'Superman in ICU' to Possible Character Deaths, 5 Hints We Got About the Plot of James Gunn’s DC Film

We get to see some new scenes and story beats for the characters in The Suicide Squad trailer. It showcased to us what the team is going to like and the direction that the story may be taking. There is a lot to unpack here, so we are taking a look at five hints towards the plot from The Suicide Squad’s new trailer. 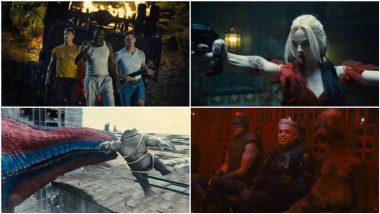 The Suicide Squad Trailer: 5 Hints Towards the Plot That We Got About James Gunn’s DC Film (Photo Credit: Twitter)

We just got a new trailer for James Gunn’s The Suicide Squad, and it hints towards new things that weren’t mentioned in the first two trailers for the film. The trailer dives more into the plot as it gives us a look at all the characters we will be seeing and what their role in the film will be of. Officially dubbed as the “Rain” trailer, it showcases a completely new song, by Grandson, just recorded for The Suicide Squad. Gunn had mentioned earlier on Twitter that how happy he is about the fact the new song recorded is “so close to being a pop classic”.  The Suicide Squad Trailer: Warner Brothers Unveil Another Glimpse of the Film, Grandson & Jessie Reyez’s New Song ‘Rain’ Adds Drama (Watch Video).

Along with the song we did get to see some new scenes and story beats for the characters too, it showcased to us what the team is going to like and the direction that the story may be taking. There is a lot to unpack here, so we are taking a look at five hints towards the plot from The Suicide Squad’s new trailer.

Superman in the ICU due to Bloodsport

Although this information was already known, it is outrightly mentioned in the trailer by Amanda Waller (Viola Davis) which really brought things into perspective. It’s revealed that Bloodsport (Idris Elba) shot him with a Kryptonite bullet, which ended up with the Man of Steel being put into an ICU. It’s a great nod to the comics since Bloodsport does indeed shoot Superman in the chest with a Kryptonite bullet injuring him. It’s fun to see The Suicide Squad embrace more of the wacky ideas from the DC universe for it gives the movie flair of its own. Interestingly this incident was taken from the comics which was also Bloodsport's very first appearance.

Superman's trending because people are annoyed Bloodsport shot him with a Kryptonite bullet in #TheSuicideSquad?

The beginning of the trailer sets up the motivation for Bloodsport to accept this mission right off the bat. It shows him talking to his daughter who tells him how Amanda Waller approached her offering help with the trouble that she is in. The motivation for Bloodsport seems similar to that of Will Smith’s Deadshot from the first Suicide Squad film, which makes sense for Idris Elba was originally cast in the role of Deadshot but then had his character change to Bloodsport, so that it would leave the room open for Will Smith to reprise the role in future.

With the trailer, we seemingly might have gotten the confirmation that there will be two teams that will be leading on with the mission. Team A includes Rick Flag, Javelin, TDK, Captain Boomerang, Harley Quinn, Savant, Blackguard, Weasel and Mongal, while Team B will consist of Peacemaker, Bloodsport, King Shark, Polka-Dot Man and Ratcatcher 2. There was even the Thinker present in the trailer, but what his role might be is still a mystery.  The Suicide Squad Trailer: James Gunn’s Supervillain Flick Sees a Monster Plot With Crazy Weird Characters (Watch Video).

Majority of Team A dying

With the name of the movie being The Suicide Squad, you do expect a few members to die to hone in on the word suicide. While this has been heavily hinted at in the previous trailer, it does seem like the majority of Team A will be dying with the exception of Rick Flag and Harley Quinn since they do join up with Team B as well. With Team A just being shown in a few clips and not being that big of a focus in the trailer, it does seem like they are going to be the disposable bunch of characters as we can’t wait to see in what hilarious fashion is Gunn going to kill them off in.

The big reveal of the first few trailers was the inclusion of the classic villain, Starro. The alien mind-controlling starfish was one of the first few foes that the Justice League fought in their debut comics, and with his inclusion, it does seem like the movie is going to embrace the weirder side of the DC universe. We get a quick look at his power since we see him shooting out small starfishes off him which helps him mind control people.

(The above story first appeared on LatestLY on Jun 23, 2021 03:44 PM IST. For more news and updates on politics, world, sports, entertainment and lifestyle, log on to our website latestly.com).