The film is now streaming on Netflix and it's what I would call a chaotic mess with the most panic-induced 2 hours you will ever spend. 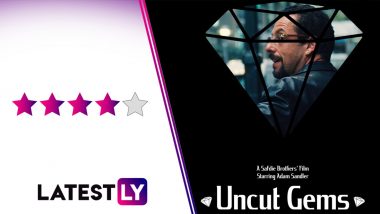 Uncut Gems Movie Review: If you're a follower of films and award shows, you probably heard about the big Oscar snub this year, which was Adam Sandler for Uncut Gems in the best actor category. Even as Adam Driver, Joaquin Phoenix, Antonio Banderas, Leonardo DiCaprio and Jonathan Pryce are all deserving nominees, having watched Uncut Gems I realise, Sandler did deserve that place. The film is now streaming on Netflix and it's what I would call a chaotic mess with the most panic-induced 2 hours you will ever spend. Yes, Sandler's crime/mystery drama has all the elements to constantly keep you on the edge. What can you say about a protagonist who probably has colon cancer, tries being an affectionate dad, is a terrible husband, an extremely jealous boyfriend who punches the sh*t out of a coked-up The Weekend and above all is probably the worst gambler of all time? Well, I'd surely not have pictured Adam Sandler to play that. Adam Sandler Birthday Special: 5 Movies Featuring the Actor That Can Make Even the Haters' Dull Day Brighter.

Sandler's Howard Ratner owns a jewellery store in the Diamond District of Manhattan. Among his few employees is also his mistress (Julia Fox). Ratner is married to Dinah (Idina Menzel) who’s at the tipping point in their failed marriage. And among all this, what's the closest to Ratner is nothing but his addiction to gamble and hustle for money with every second of his life on the line. Howard’s business runs with the help of Demany (Lakeith Stanfield) who's like a middleman, hooking him up with customers from the music and sports industry. Although Howard's new obsession happens to be a rare piece black opal rock that he somehow smuggles from an Ethiopian mine (that whole mining sequence is boring!). Although, all hell breaks loose when the famous basketball player Kevin Garnett (who plays himself) begins to fancy this rock and Ratner has a hard time getting his only money-making scheme at the point, the rock back from him.

What keeps you onboard for this film that is bizarrely loud with people constantly talking over each other is its shady lead. His constant adrenaline rushing acts keep you hooked. Howard is the kind who could try to make money off anything and everything and hence he's betting on games, pawning stuff, selling fake Rolex watches, basically everything under the sun to pay off his debts. Safdie brothers, Josh and Benny, direct this taut thriller and one can agree that much of their first-hand understanding of this world comes from the fact that their father worked in the Diamond District. No wonder the film has this raw charm that pushes you right in the middle of Manhattan's market and Sandler's amazingly fast-talking perfection of an accent there. The film could have benefitted from a better background score though, especially since there are potent opportunities for it.

Much like its lead, the film is constantly on-the-go, with the camera on-the-move to keep up its pace with an amazing breakneck script. There's no time to breathe and at one point when Sandler is kidnapped in a car, there's ample of yelling and close-ups so tight that as a viewer you almost feel like they are grasping you. From a spot-on costume design that makes Sandler stand out like the guy who does the 'dirty' business to showcasing his bare dad bod in a crucial scene, the Safdie brothers make sure that at no point do you feel that actors have been placed in this world. They bring a quality of realism to it with little bits and pieces. The film is shot in cramped places, dimly lit areas which help you stay in the loop and feel the madness that echoes in them.

The beauty of this film is that despite knowing what a messed up character Howard is, you can't help but root for him every time he comes close to cracking a hustle and almost getting the money that he badly needs. The sheer pattern of him getting lucky and then messing it all up works only because of the solid direction. On paper, the film may not have anything new to offer but the way the Safdie brothers execute it, it gives you some serious anxiety. For someone who is a control freak like me, watching Howard make one terrible choice after another gets annoying to the core and after hearing him curse 'F**k for the nth time in the film,  I couldn't help but echo his reaction, such is the impact. It feels like we are on one of those experiences,  'A day in the life of Howard', of course, there's nothing easygoing about this one! The climax of the film seems like a fitting end to how the story begins. It's almost like coming towards the end of a survival game. Much earlier in the film you realise, there is actually no win or lose situation for Howard, given his ways, it's always lose-lose.

Check Out the Trailer of Uncut Gems Here:

It's a shame that Sandler for long had been reduced to doing light-hearted, comic roles in Hollywood when he could have done something like this. This is Sandler at his best and not once do you feel that he's the same goofy guy who stars in Grown Ups. Sandler gets under the skin of someone living on the edge and it's evident from his walk, the gleam in his eyes when he's winning the bets and his blabbering bits as talks his way out of the loan sharks.The film's supporting cast is strong with Lakeith Stanfield, Kevin Garnett, Idina Menzel, all giving their best. But I particularly felt, Lakeith Stanfield deserved a little more screentime given that Demany comes across as one hell of a character that he pulls off with total ease.

- The music could have been better

- Lakeith Stanfield seems underused for the talent he is

Uncut Gems is a stunner in terms of direction and performances. There's only a few films that make you root for losers like Howard and suck you into this exhilarating world where survival is dependent on making not good choices but the lesser bad ones. Safdies create an experience that is not meant to be fulfilling, it's the one where you get some punches just to make you feel alive, just like One Republic said it,  "What kills you, makes you feel alive".

(The above story first appeared on LatestLY on Jan 31, 2020 11:46 PM IST. For more news and updates on politics, world, sports, entertainment and lifestyle, log on to our website latestly.com).