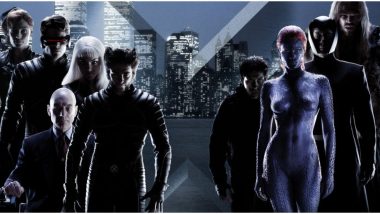 On July 14, 2000, the first X-Men film, directed by Bryan Singer, came out in theatres in the United States of America. Today marks the 20-year anniversary of the film that spawned one of the most successful franchises in Hollywood. X-Men is also responsible for ushering in the Marvel fandom among the movie-goers, at a time Hollywood were more obsessed with DC heavyweights, Superman and Batman. Not to mention, introducing the world to Hugh Jackman, whose role as Logan/Wolverine is one of the best superhero portrayals ever. Shirtless Hugh Jackman Fights a Toy Wolverine in This Throwback Video as X-Men Completes 20 Years.

But Jackman wasn't the sole good thing about the film. While James McAvoy did a good job as the younger Professor X in the prequel franchise, Sir Patrick Stewart was THE Professor. And how good was Sir Ian Mckellen as the evil Magneto! X-Men also showed how to handle an ensemble cast in a film, a formula that Avengers films perfected later.

Now when you look back at the franchise that ended (on a lame note) with last year's Dark Phoenix, (before folding in MCU in future), we have bitter-sweet memories about the franchise. There was some highs - X2, First Class, Days of Future Past and of course, Logan and Deadpool. There were lows like The Last Stand, X-Men: Origins - Wolverine, Apocalypse, Dark Phoenix. The first X-Men film came in between - a decent superhero film that has its moments and flaws, but was successful enough to bring in the fans. Ryan Reynolds Crashes Hugh Jackman’s OG X-Men Online Reunion As You Would Expect Deadpool To Do! (Watch Video).

As the movie completes 20 years, let's look at seven of our favourite scenes in the film.

There is a reason why we call our favourite characters of X-Men as 'mutants'. Despite having superpowers, they are seen by the non-powered people as someone to be feared and dangerous. An interesting note to make here is that Singer being gay, he subtly draws parallels to how society looks at himosexuality the same way as mutants are seen in the film. And on occasions, their very mutation comes across as a tragedy for them. As in the case of Rogue (Anna Paquin), whose mere touch can make you lose your life-force, first experienced in the shocking scene where she kisses her boyfriend. Dark Phoenix: From 2000 to 2019, Ranking All the Main X-Men Movies From the Worst to the Best (SPOILERS AHEAD).

Hugh Jackman makes a badass entry as the (seemingly) immortal, but amnesiac, mutant who makes a living engaging in cage fights. It is a goosebump moment for the fans, when for the first time, we see him draw his iconic adamantium claws out!

Yup, the relevance of this scene was later ruined in being a plothole when it was revealed in X-Men: Origins - Wolverine, that Wolverine and Sabretooth were half-brothers. But it was a heart-pumping moment when Sabretooth (Tyler Mane) attacks Wolverine for the first time, when he was travelling along with a runaway Rogue.

Senator Kelly represents the part of human society who feels affronted at the idea of facing anything unconventional. To suppress the mutants, he wants to push the 'Mutant Registration Act' in Congress to make the mutants reveal their identities and powers. In retaliation, Magneto gets Kelly kidnapped and tries to make a mutant out of him. The experiment goes horribly wrong, and the result is well... something that we can't easily forget.

Magneto vs Cops vs Professor X

Magneto is powerful, no doubt, and we see the glimpse of that when he turns the guns of the cops surrounding him to turn towards their owners. But we also have Professor X in the action, who makes Magneto's own man to turn against his leader, albeit mind-controlled!

Although Wolverine is a powerful mutant with dangerous rage issues, he has never been able to best Magneto in a duel in the entire franchise. I kid you, not! The first example that Logan is no match for Magneto comes in the train scene, when the leader of the Brotherhood of Mutants arrive to kidnap Rogue.

The Statue of Liberty Fight

The climactic fight scene has plenty of cheese, but it is also pretty fun. The location is just awesome - the top of the Statue of Liberty. The main mutants get to fight each other, with Logan and Sabretooth's brutal showdown standing out. There is a fun Mystique twist. Above all, the tension is palpable as Magneto tries to use a bound Rogue's powers to change everyone on Earth as mutants.

(The above story first appeared on LatestLY on Jul 14, 2020 10:04 PM IST. For more news and updates on politics, world, sports, entertainment and lifestyle, log on to our website latestly.com).