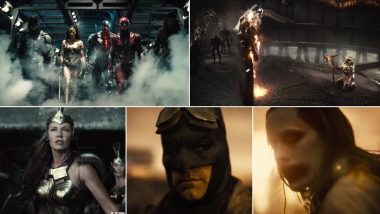 The wait for Zack Snyder's Justice League's sneak peek is finally over. Post the negative reviews that Justice League received, DC fans asked the makers to let Zack show his version of the films to the fans. Snyder had left the shoot of the film midway due to some personal issues and claimed that his version of the film was better than what the audience got to see in theatres. After much pressure from the audience, Warner Bros made the announcement of the film last year. Zack Snyder's Justice League: Gal Gadot, Ben Affleck, Henry Cavill Will Return to Shoot Additional Scenes.

It was a few days back when the official poster of the film was also shared. Now, the makers have released the official trailer of the film as well. The film will bring back all your favourite DC superheroes on the screen. The trailer is full of adrenaline but it is the ominous beginning and the end of the trailer that steals the show. Lex Luthor’s “The god is dead” opens the trailer while we get to see a glimpse of Jared Leto’s Joker at the end and this is impressive enough for the viewers to be excited about the film.

The trailer shows how post Superman's ultimate sacrifice, Batman and Wonder Woman assemble a team of superheroes including Flash, Aquaman, and Cyborg, in order to save the world from Steppenwolf. Powerful dialogues, dramatic visual effects and compelling background music make the trailer look fantastic. Considering the backlash that Justice League received, fans cannot wait to see what Zack Snyder has to offer and will he be able to stand the test. While that will happen on a later day, check out the trailer below:

It was said that Justice League's Snyder Cut would be divided into four parts and would be released as a mini-series on HBO Max but Snyder clarifies that nothing of such sorts will happen and the fans will, after all, enjoy it as a film. Back when Zack left the film, Joss Whedon of The Avengers fame took over and reshot the film and allegedly changed Snyder's take. Snyder had shot certain scenes of the film according to him now and has even added two new scenes to the film. Zack Snyder's Justice League Trailer LEAKS Online Ahead of Launch At DC FanDome.

(The above story first appeared on LatestLY on Feb 14, 2021 11:10 PM IST. For more news and updates on politics, world, sports, entertainment and lifestyle, log on to our website latestly.com).