Now, apart from the editing and restoring his version of Justice League for free, Zack Snyder will also be shooting for additional scenes with Gal Gadot, Henry Cavill, Ben Affleck and Ray Fisher. 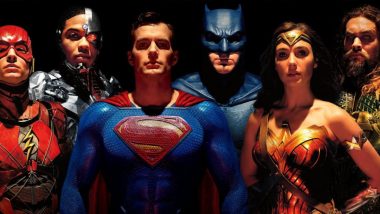 There are several reasons for us to eagerly look forward to 2021. Number one, of course, is that we might have a vaccine for COVID-19 by then. Then, we have Zack Snyder's Justice League coming out on HBO Max as a four-part mini-series. The director stepped down from the directorial duties on the original film following a personal tragedy, making way for Joss Whedon to take over. But, fans demanded a Snyder Cut for years. Now, apart from the editing and restoring his version for free, the director will also be shooting for additional scenes with Gal Gadot, Henry Cavill, Ben Affleck and Ray Fisher. Justice League Snyder Cut Trailer Breakdown: Darkseid, Black Superman, Cyborg’s Backstory, Flash’s Speed-Force and More – Just 25 Visuals That Caught Our Attention in Zack Snyder’s Version!

Yes, the call sheet also mentions Fisher, who is currently in a row with Waner Bros. The actor accused Whedon of toxic behaviour which was enabled by top WB executives. The studio has launched an investigation but has also accused Fisher of not cooperating with it. We'd love to be a fly on these additional shoots. Jason Momoa Backs Justice League Co-star Ray Fisher, Demands Fair Investigation Into Toxic Work Culture During Reshoots (See Pic).

The additional shooting of Justice League won't take much time. As per a report by The Hollywood Reporter, the shoot will only last a week. While Gal returns as Wonder Woman, Ben as Batman, Henry as Superman, Ray as Cyborg, we wonder why Jason Momoa has no extra scenes to shoot as Aquaman.

A trailer for this event was released at the DC FanDome event. The trailer introduced us to a lot of original concepts that were axed by Whedon. There is The Flash's love interest who'd be introduced in the new version. Also, Cyborg will see his father die.

(The above story first appeared on LatestLY on Sep 24, 2020 08:42 PM IST. For more news and updates on politics, world, sports, entertainment and lifestyle, log on to our website latestly.com).