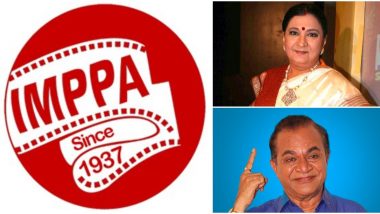 Earlier this week, the Indian Motion Pictures Producers Association (IMPPA) approached and filed a petition at the Bombay High Court, challenging the Government's decision to not let actors above the age of 65 to resume work. Considering that they fall under the high-risk category of COVID-19, back in May when film and TV shoots were given the go-ahead to resume work, the Government had banned child artists below the age of 10 and actor above 60-years of age from working. Taarak Mehta Ka Ooltah Chashmah Actor Ghanshyam Nayak Aka Nattu Kaka Reveals His Attachment With The Show, Says 'I Wish to Take My Last Breath on the Set'.

This did not sit well with many senior actors who claimed that if they were fit and fine, they had the right to make the choice for themselves, whether or not to resume work. And now, a petition has been filed in the Bombay High Court, demanding that this diktat be scrapped. Natu Kaka From TMKOC, Sarla Kashyap From Naati Pinky and More - Popular Senior Characters We Might Not See On Small Screens As Per FWICE COVID-19 Guidelines.

Mumbai Mirror published a copy of the petition that reads, "As per the list available with the petitioner, there are thousands of people aged above 65 years who were participating in shooting of programmes prior to the lockdown. The shootings of such films and programmes have been left in-between due to non-availability of such people." Television Shows Barred From Letting Actors Above 65 Years of Age Return To Work, FWICE To Approach State and Central Governments Over Diktat (Deets Inside).

"The entire trade has come to a standstill and all those concerned with the industry are in starving condition. Some of them have also committed suicide," claims the petition.

A hearing too took place with regards to a similar petition where the court has asked the State Government to provide answers to questions like whether or not did they enforce similar rules for people above 65 years of age travelling or opening up their personal shops or resuming work. The state Government is also answerable to the court over whether this decision was taken after conducting and considering any studies in regards to the high-risk group.

(The above story first appeared on LatestLY on Jul 23, 2020 04:05 PM IST. For more news and updates on politics, world, sports, entertainment and lifestyle, log on to our website latestly.com).