Taarak Mehta Ka Ooltah Chashmah Actor Ghanshyam Nayak Aka Nattu Kaka Reveals His Attachment With The Show, Says 'I Wish to Take My Last Breath on the Set'

Taarak Mehta Ka Ooltah Chashmah's Nattu Kaka, a role that is essayed by actor Ghanshyam Nayak, has also joined in making his displeasure evident about not being able to shoot. He says he is so attached to the show that he may die if he does not shoot. 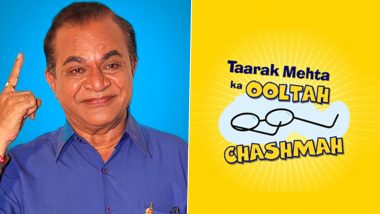 While major respite has come to the film and television industries with the Maharashtra Government permitting the beginning of shoots from Mid-June, it has come as a bane for child artists who are below 10 years of age and senior actors above 65 years of age. The government has barred them for shooting for their respective projects given that they are at a high risk of contracting COVID-19. Taarak Mehta Ka Ooltah Chashmah Makers Not Decided on Date For Resuming Shoots.

In a conversation with SpotBoyE, Ghanshyam was quoted as saying, "Next month I will be completing 12 years with Taarak Mehta Ka Ooltah Chasmah, so you can imagine how close I am with the character and my whole team. We have completed almost 3000 episodes together."

Revealing that he is completely fit and healthy and is all set to shoot, Ghanshyam told the portal, "I will continue with the show as I am capable and very healthy. And nothing has been conveyed by the producers to me, so, I am very much part of it and will always be. Ever since this news has spread that due to government rules I may not shoot for the show, a lot of messages have come from my fans and well-wishers that the show will be incomplete without you. Nattu Kaka ko Taarak Mehta mein hona hi chahiye." Television Shows Barred From Letting Actors Above 65 Years of Age Return To Work, FWICE To Approach State and Central Governments Over Diktat (Deets Inside).

However, he also revealed that while show's producer Asit Kumar Modi also wants him to shoot for the show, the producer is tied up with the Government rules and can not go against them to accommodate the actor. "He is very much ready to shoot with me but obviously he can't go against the government rule. I am the senior-most artiste on the show. But I have left everything on God now, as I believe him in a lot and I am praying that they alter the rules and permit me also to shoot for the show, which is my life," he was quoted as saying. Natu Kaka From TMKOC, Sarla Kashyap From Naati Pinky and More - Popular Senior Characters We Might Not See On Small Screens As Per FWICE COVID-19 Guidelines.

"I am ready (to return to shooting) because if I will not act, I may die. As an artist, I want to work till last day of my life. Due to God's grace, I am well to do and have a big happy family around me but the idea of not shooting makes me feel depressed. And even at the age of 75, I am healthy enough to work. If they give me a call time for tomorrow, I will be there on the set on time to roll," Ghanshyam revealed.

The passionate actor also concluded, "This show has changed my life and the popularity it has given, makes me feel on top of the world. It's been such a long time working here that I have made everything out of it. I am so attached to the show that sometimes, I wish to take my last breath on the set."

(The above story first appeared on LatestLY on Jun 12, 2020 06:51 PM IST. For more news and updates on politics, world, sports, entertainment and lifestyle, log on to our website latestly.com).