Television Shows Barred From Letting Actors Above 65 Years of Age Return To Work, FWICE To Approach State and Central Governments Over Diktat (Deets Inside) 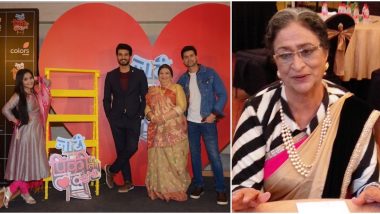 While the upside of the on-going nationwide unlock will see the shoots of films and televisions resume from mid-June, the Government diktat issued states that no actor above the age of 65 will be allowed to wok on the sets, given that the COVID-19 pandemic is still not under control and that kids and senior citizens are the most vulnerable to catch the pandemic. However, this move has not gone well with the senior actors in the industry who are various levels upset, right from how can senior actors who have given their whole and soul for so long be dismissed to how will they earn their livelihood now. They also believe that it is their right to decide whether or not they want to risk their lives and come to work. No Hugs, Kisses, Intimate Scenes and Grand Events To Be Shot Post Lockdown When Shoots Resume, Reveals Producer JD Majethia (Deets Inside).

Speaking to BT, Guddan Tumse Na Ho Payega's Dadi, actress Daljit Soundh who is 70 plus and is also seen in Kumkum Bhagya, told the daily that if she is not allowed to work, that would mean she would be facing major monetary issues. "I am unmarried and I live alone. So, I need to earn for survival. This rule should be applicable to those who are ailing or unwell. If the new rule is implemented, it will certainly lead to monetary issues for people like me," she revealed. CINTAA and FWICE Plan To Resume Shoots From June End (Deets Inside).

Naati Pinky Ki Lambi Love Story actress Bharati Achrekar, who plays a pivotal role (she is Naati's only supporter and always encouraged her) believes that as a senior and after contributing a lot to this field, she as an actor has the complete right to decide whether or not she can show up to shoot for her show. She says, "I was furious when I heard about the new rule. How can you do away with senior artistes, who have given so many years to the industry? How can anyone else decide on our behalf whether we should work? It should be my prerogative as well." Taarak Mehta Ka Ooltah Chashmah Makers Not Decided on Date For Resuming Shoots.

"If I am healthy, why should I be deprived of work? There are solutions — for example, a senior artiste can work for three days in a week. In my case specifically, as I stay far away (Dadar), the producers can arrange accommodation on the set to avoid any health risks," concludes the senior actress. Fair point Bharati!! As per the report, it is being said that chances are that Taarak Mehta Ka Ooltah Chashmah's character Nattu Kaka will also not be returning to the show. Maharashtra Allows Conditional Film Shoot in Non-Containment Zones, Producers JD Majethia and Ekta Kapoor Thank CM Uddhav Thackeray (Watch Video).

However, in their defence, the producers have gone on to reveal that they are trying to work a way out of this diktat. In fact, Taarak Mehta Ka Ooltah Chashmah producer Asit Kumarr Modi, is of the belief that when shop owners who are senior citizens are being allowed to run their daily businesses then this rule should not be applicable in the entertainment industry as well.

"Most senior artists don’t have an alternative source of income. Who will take care of their expenses? Also, there is no such rule for senior citizens, who run small shops. So, why should such a rule be implemented in our line of work?" The new GR is applicable for two months and will be amended later. But not having a pivotal character played by a senior artiste will affect the continuity until then. Everyone has to come together to request the government to rethink and reconsider this rule," states Modi.

However, the FWICE has maintained that this move has been implemented keeping in mind the age of these senior actors. BN Tiwari, president of FWICE told the daily, "I had a meeting with the Cine and TV Artistes’ Association (CINTAA), which has many senior artistes as its members. They have already been out of work owing to the lockdown. They will suffer more if they are not allowed to shoot now. The federation plans to approach the state and central governments regarding this. We want to request them to consider artistes’ health and not their age. We will ensure all precautionary measures to ensure their safety." Well, we sincerely hope everyone comes up on the winning sid eof this employement war!!

(The above story first appeared on LatestLY on Jun 08, 2020 03:49 PM IST. For more news and updates on politics, world, sports, entertainment and lifestyle, log on to our website latestly.com).