Ishaan Khatter Talks About His Romance With Tabu in a Suitable Boy: 'It Is Not Frivolous'

Actor Ishaan Khatter, who plays the role of Maan Kapoor in Mira Nair's adaptation of Vikram Seth's novel “A Suitable Boy”, says his character's relationship with Tabu's Saeeda Bai has a “forbidden romance” feel but it is shown in a beautiful and layered manner. 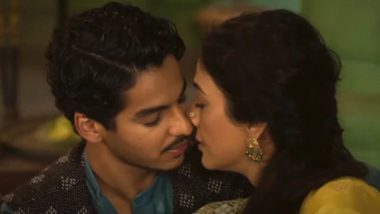 Mumbai, Aug 3 (PTI) Actor Ishaan Khatter, who plays the role of Maan Kapoor in Mira Nair's adaptation of Vikram Seth's novel “A Suitable Boy”, says his character's relationship with Tabu's Saeeda Bai has a “forbidden romance” feel but it is shown in a beautiful and layered manner. A Suitable Boy Star Ishaan Khatter Reveals He Doesn’t Feel Too Pressurised to be Cast as The Lead, Here’s Why.

Khatter is making his television debut with the six-part BBC drama, directed by Nair, who is known for critically-acclaimed international hits such as "Salaam Bombay", "Monsoon Wedding" and "The Namesake".

Seth's novel charts the fortunes of four large families in North India of 1951, a time when the country was carving its own identity as an independent nation by planning to go to the polls for its first democratic general election.

In the series, Khatter plays the wayward son of a politician. A Suitable Boy: Ahead Of Its BBC One Premiere, Ishaan Khatter and Tabu's Web-Series Gets Positive Early Reviews!

"It is an uncommon relationship even in today's time. In the story, within the narrative, it is something of a forbidden romance. She is a Muslim courtesan, he is the son of a minister from a Hindu family and almost half her age. It is highly looked down upon in Maan's social strata. (But) It is a very beautiful relationship,” Khatter told PTI in an interview.

The "Dhadak" star, who the younger half brother of actor Shahid Kapoor, said playing Maan has been the highlight of his career.

“Mira di's take on it is very beautiful. It is very deep and layered, it is not frivolous. We both were aware that the characters can't feel awkward and it cannot because it is not written that way. I don't know how often roles like this will be written. It is one of the highlights for me,” he added.

Praising co-star Tabu's ability to seamlessly transform into her characters, Khatter said only “an actor of her caliber, her depth and understanding” could do justice to Saeeda Bai, a courtesan with the heart of a poet.

“She seamlessly adapts into whatever world she is in, it doesn't feel like an effort. There is no awkwardness, stress or weirdness, she is very easy and comfortable," he said, calling Tabu one of his favourite actors in the industry.

Describing Maan as a "non-conformist", Khatter said he relied mainly on the script to play the part.

"My character functions on his own rhythm, doesn't care to bow down to convention. If he feels something is right, he will follow it. He is the black sheep of the family. His father is fighting against zamindari and wants his son to get involved and understand the value of things. But Maan is on his own journey. He is not careless but he is reckless. He is an unpredictable character."

Khatter said when he began shooting for the show, he read some portions of the novel to understand his character's motivations.

The actor said though he largely depended on the script, he would read portions of Seth's novel to imbibe details about his character's background the night before his scenes were to be shot.

The Clouds" and "Dhadak". It was a journey of eight to nine months from casting to pre-production, before he knew he was on board.

"Hearing her (Mira Nair) name and being an admirer of her work, I went in for audition. I was given one scene and was called two days later as Mira di was coming to town and there was to be a second audition that she could then take to England for BBC and Lookout Point, the other producers,” he said, adding that he got an email about his selection a week after the audition.

The actor shot for "A Suitable Boy" between schedules of "Kaali Peeli", his next Hindi film. The series started airing in the UK from July. It will be available around the world, including India, on Netflix, soon.