Khwahish Song: Tanzeel Khan Opens Up on His Track From Debut Album, Says ‘It Holds a Super Special Place in My Heart’

Sung by Tanzeel, this video also stars model Chahat Tandon along with him. The song is written and sung by Tanzeel. The seven-track album 'Dastaan' will be released early next year. 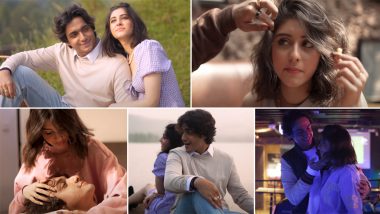 Singer and songwriter Tanzeel Khan has released the second song from his debut album 'Dastaan'. The title of this track is 'Khwahish'. 'Yeh Dil' was the first track from this album that was released on October 18. Sung by Tanzeel, this video also stars model Chahat Tandon along with him. The song is written and sung by Tanzeel. Pushpa The Rise – Part 1 Song Saami Saami: Allu Arjun and Rashmika Mandanna Look Adorable Together In This Third Single Crooned By Mounika Yadav! (Watch Video).

While talking about the track, Tanzeel says: "This song holds a super special place in my heart," he exclaims Tanzeel, before adding, "This is my vibe, something I would've listened to everyday on a loop if someone else had made it. Honestly this song took some time to get ready. It's a great melody and one I think my fans would love to sing along to." Annaatthe Song Vaa Saamy: Superstar Rajinikanth’s Track Is a Powerful Number With Cool Beats! (Watch Video).

Tanzeel further adds about the album that was written over a period of two years. "The album has been written from the perspective of someone who is dealing with the pain of heartbreak, and is relearning to be himself again," he says. "It is a slice of life, and contains the gamut of emotions from happiness to sadness, pain and love. I want my listeners to be able to see themselves in my songs," he concludes. The seven-track album 'Dastaan' will be released early next year.

(The above story first appeared on LatestLY on Oct 28, 2021 11:31 PM IST. For more news and updates on politics, world, sports, entertainment and lifestyle, log on to our website latestly.com).