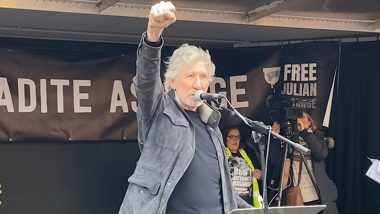 Legendary British rock band Pink Floyd's co-founder Roger Waters has slammed Indian Prime Minister Narendra Modi over the Citizenship Amendment Act (CAA). A few days ago, Waters was spotted protesting in London, demanding the release of Wikileaks founder Julian Assange. While protesting, he also read out an English translation of Indian activist Aamir Aziz's poem "Sab Yaad Rakha Jayega" (Everything will be remembered) and told the gathered audience that Aziz's fighting against Modi's "fascist and racist citizenship law". Shah Rukh Khan’s #AskSRK Twitter Session: From Being Asked if He Is Scared in India to His Silence on CAA Protests, 5 Questions King Khan Wistfully Chose to Ignore.

"Everything will be remembered. Killers, we will become ghosts and write of your killings, with all the evidence. You write jokes in courts, we will write justice on the walls. We will speak so loudly that even the deaf will hear. You write injustice on the earth, we will write revolution in the sky," Waters said. Anti-CAA and NRC Protestors Sing Shah Rukh Khan Songs While Questioning his Silence on the Grave Issue (Watch Video)

‘This kid’s got a future’ says Pink Floyd’s @RogerWaters and recites 30yo Jamia alum @AamirAzizJmi's protest poetry in London: pic.twitter.com/RQwuEyaoqC

Extraordinary. THE Roger Waters. Pink Floyd has echoed in the corridors of College for 5 decades. https://t.co/fx6I4YbinS

After finishing the verse, Waters also praised Aziz, saying "I think this kid's gotta future". The original composition by Aamir Aziz was unveiled around two months ago, when protests against the CAA initially sparked off in New Delhi.

(The above story first appeared on LatestLY on Feb 27, 2020 06:09 PM IST. For more news and updates on politics, world, sports, entertainment and lifestyle, log on to our website latestly.com).