Ranu Mondal gets bashed by Twitterati for behaving pricey when a fan asked her for a selfie. She is the one who recently recorded three songs with Himesh Reshammiya for his upcoming film. Have a look! 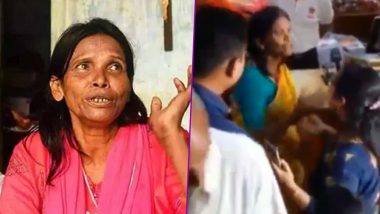 In the world of showbiz, recognition is surely given to talented peeps. One of the biggest example of the same can be internet sensation, Ranu Mondal whose sorrowful as well as soulful rendition of Lata Mangeshkar's song Ek Pyaar Ka Nagma Hai on a railway platform made her a celebrity overnight. From being no one to now being quite popular, Ranu Mondal's life is nothing less than a fairytale. Having said that, seems like the celebrity bukhar is on Ranu's mind as she has now started to act pricey. Ranu Mondal Meets Her Icon Lata Mangeshkar? Here's a Fact Check of The YouTube Video Going Viral.

The singer who has recorded three songs for Himesh Reshammiya's upcoming film, Happy Hardy and Heer, was recently spotted showing tantrums when a fan asked her for a selfie. As seen in the viral video, a woman who happens to be the singer's fan, tapped her for a selfie. Ranu in quite a fussy way turned around and said, "Dekhiye, aap please, don't touch." That's not it, as Mondal also pushed the fan behind and said, "Yeh kya hai? Iska matlab kya hai? Yeh, what it means?" Ranu Mondal Records Another Song With Himesh Reshammiya, This Time It Is ‘Aashiqui Mein Teri’ Reprise Version & Internet Is Loving It (Watch Video).

In no time, social media got flooded with reactions on this viral clip. Fans bashed the singer for being pricey. Given her humble story to stardom, Twitter slammed Mondal for acting strange. Check out a few tweets:

Ranu Mondal, who was singing in Railway Station says:

* She's now a celebrity and others shouldn't touch her!

This is what happens when people don't know to handle the instant name and fame they get! pic.twitter.com/7tRk1WHTsL

This incident clearly shows why the Bollywood is business of few families? Because these star families know how to act with people and manage their show. If common man get popular he/she behave with attitude. #RanuMondal

But then there were a few who even supported the singer. See below:

To be honest, Indians do not respect personal space. Yet you see the arrogance of people who call her arrogant, for expressing her displeasure.

Its the elite & entitled attitude that being poor means should have no self respect & personal space.

She is explaining the lady in decent way. Otherwise overnight stars are rude. #RanuMondal

So what's your take on Ranu Mondal's fussy behaviour to a fan? Do you think she went overboard or you support her and feel that the reaction was normal? We want to know, let us know your take on the same in the comment section below!

(The above story first appeared on LatestLY on Nov 06, 2019 01:17 PM IST. For more news and updates on politics, world, sports, entertainment and lifestyle, log on to our website latestly.com).