Nandamuri Kalyan Ram, who was last seen in the NTR Kathanayakudu as Nandamuri Harikrishna, is seen in the lead role in this week's Telugu release, 118. 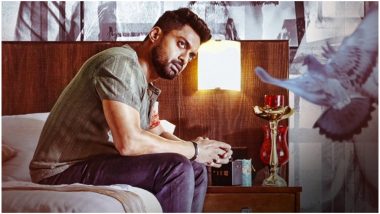 Nandamuri Kalyan Ram, who was last seen in the NTR Kathanayakudu as Nandamuri Harikrishna, is seen in the lead role in this week's Telugu release, 118. The unusual title for the thriller has caught the fancy of Telugu movie lovers, and so are the promos of the film. 118 also has Shalini Pandey and Nivetha Thomas as the female leads. The movie is directed by former cinematographer KV Guhan, making his directorial debut. NTR Kathanayakudu Movie Review: Nandamuri Balakrishna and Vidya Balan's Engaging Performance Drives This Otherwise Slow-Paced Biopic.

In 118, Kalyan Ram plays a reporter, who looks into crime scenes. His life takes for a weird turn when he sees a dream of a woman being beaten by baddies, only to meet that very same woman in real life. With the help of his girlfriend, played by Shalini Pandey, he tries out the truth behind why he had this dream about this woman and whether it will happen in real life. 118 Trailer Starring Nandamuri Kalyan Ram, Nivetha Thomas and Shalini Pandey to Be Out Today.

118 has got mixed reviews from the critics, who loved the unusual premise, but had issues with its plotting. Check out what some of the websites have to say about the film:

Great Andhra says, "118 is a neat thriller with some early decent sequences. Though it doesn’t present anything new, it doesn’t bore us either, it holds interest with racy narrative."

Hans India says, " Putting a few logics aside, the director tried to come up with a thrilling film and his skill in writing helped him to keep the audiences engaged in the screenplay. Except some shortcomings, the film impresses the right set of audiences."

Mirchi9 says, "In the end, 118 has a decent beginning and ending. It is everything that happens in between where there is a problem. Still, it isn’t too problematic but instead makes the whole thing passable affair as there is a dilution of narrative due to needless raciness."

Tollywood.net says, "118 is a mystery thriller drama and KV Guhan doesn’t waste the time and quickly gets to the point and keeps the interest alive till end. The racy screenplay and engaging action episodes make the movie interesting. 118 loses its sheen in Flashback episode, which is based on a medical conspiracy like others mystery thrillers. There are some unanswered questions which are ignored by the director KV Guhan. The lucid dreaming concept looks silly. 118 is an engaging thriller but it might not appeal to everyone."

(The above story first appeared on LatestLY on Mar 01, 2019 03:30 PM IST. For more news and updates on politics, world, sports, entertainment and lifestyle, log on to our website latestly.com).