The teaser of Arjun Reddy's Tamil remake, Adithya Varma is out and it looks promising. 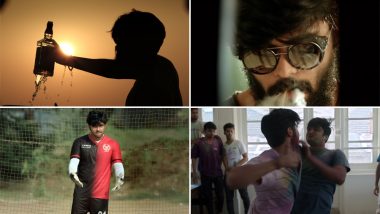 Vijay Deverakonda's Arjun Reddy was an instant hit with the masses and that even prompted the filmmakers to remake it in different languages. After Shahid Kapoor stepped into Arjun's shoes for Hindi remake, Chiyaan Vikram's son, Dhruv Vikram is ready with its Tamil version. After making headlines for all the wrong reasons, Adithya Varma is finally back on track and it sure looks promising. The makers released the first teaser of this Telugu remake and if you ask us to describe it, we'll say it's like holding a mirror to Arjun Reddy. Varmaa Is Now Adithya Varma! Dhruv Vikram’s Debut Movie Gets a New Name, Cast, Director and Poster!

There's an overdose of Arjun Reddy happening currently. The teaser of Adithya Varma is strikingly similar to its original version and we mean it in a good way. With similar scenes and character's mannerisms, it's hard to spot any distinctly stark differences.  Dhruv looks convincing as Adithya and has tried hard to adopt the character's peculiarities. While everything seems fine about this teaser, we are a bit disappointed when it comes to his chemistry with Banita. She barely has any scenes in the teaser and it was essential to highlight their moments than concentrating on Varma's character alone. #MeToo Movement: South Actress Shalu Shamu Reveals She Was Asked For Sexual Favours To Bag a Film Opposite Arjun Reddy Fame Vijay Deverakonda.

Watch the teaser of Adithya Varma below

Arjun Reddy as a story has no novelty factor and it was Vijay's stellar act that was able to woo the audiences. Interestingly, Adithya Varma was ready with its final cut until the producers decided to scrap it and reshoot it entirely. They weren't happy with director Bala's vision and considered replacing him with Giri Sayya. Eventually, Varmaa became Adithya Varma and Banita Sandhu replaced the original lead, Megha.

(The above story first appeared on LatestLY on Jun 16, 2019 01:32 PM IST. For more news and updates on politics, world, sports, entertainment and lifestyle, log on to our website latestly.com).