After RRR’s Success, SS Rajamouli to Collaborate With Mahesh Babu for a Big Project!

Director SS Rajamouli and Mahesh Babu's upcoming collaboration may go on the floors by the end of this year. Rajamouli is currently celebrating the success of his pan-India blockbuster RRR, starring Ram Charan and Jr NTR. 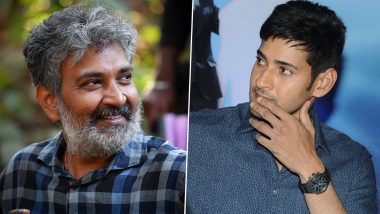 Tollywood hitmaker SS Rajamouli is currently savouring the success of his most-hyped project RRR. Not revealing much about his next big thing, Rajamouli still hints at a big-ticket movie with Mahesh Babu, which is yet to be announced. "Because of the pandemic, I had many things to wrap up for RRR. With multiple postponements and uncertainty, I had to concentrate on RRR alone. Meanwhile, I was trying to work on the storyline, which gives me hope that there are a couple of lines which interest me", Rajamouli reveals. RRR Box Office Collection Day 9: Hindi Version of Ram Charan, Jr NTR’s Film Stands at a Total of Rs 164.09 Crore in India!

As per Rajamouli, it usually takes about six to seven months for him to get the story completely penned, from the time he fixates on making the next move. "From this point, to get into the pre-visualization and pre-production ready for the shoot, it takes about eight months. So, it will get rolling by this year-end", Rajamouli stated, as he hints at the next project with Mahesh.

For now, up next for Rajamouli is a short vacation, as he wants to relax and bask in the glorious success in leisure. Mahesh Babu, on the other hand, will wrap up his commitments in the meantime, before he will set out to act under Baahubali director.

(The above story first appeared on LatestLY on Apr 03, 2022 08:00 PM IST. For more news and updates on politics, world, sports, entertainment and lifestyle, log on to our website latestly.com).