Ala Vaikunthapurramuloo: Cast, Plot, Release Date, Where To Watch Online – All You Need To Know About Allu Arjun’s Superhit Film

Allu Arjun's Ala Vaikuntapurramuloo hit the theatres in 2020 and became a blockbuster. The film was one of the highest-grossing films in 2020 and is directed by Trivikram Srinivas. 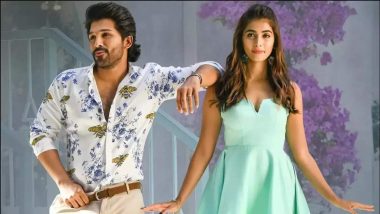 With Allu Arjun's Pushpa: The Rise's Hindi version turning out to be super successful at the ticket window, the makers of Ala Vaikunthapurramuloo, have also decided to dub their film in Hindi and release it at the theatres, Starring Allu Arjun and Pooja Hegde as the lead, the flick happens to be originally in the Telugu language which is directed by Trivikram Srinivas. It was initially released in the year 2020 and is also streaming on an OTT platform. After Pushpa Success, Allu Arjun’s Ala Vaikunthapurramuloo Hindi Dubbed Version to Hit Theatres on January 26.

The premise of the movie revolves around Bantu (Allu Arjun) who seeks validation from his cold-hearted father, however, the reality is that his biological father is an affluent businessman and not the one he thinks.

Well, the Hindi dubbed version of Arjun’s superhit film is slated to hit the screens in India later this month, which is on January 26, 2022. Allu Arjun Celebrates 2 Years of Ala Vaikunthapurramuloo by Sharing a BTS Pic From the Sets (View Post).

ALLU ARJUN: AFTER 'PUSHPA', NOW HINDI DUBBED VERSION OF 'ALA VAIKUNTHAPURRAMULOO' IN CINEMAS... After the historic success of #PushpaHindi, #AlluArjun's much-loved and hugely successful #Telugu film #AlaVaikunthapurramuloo has been dubbed in #Hindi and will release in *cinemas*. pic.twitter.com/1jqkcqCEzI

Where To Watch Ala Vaikunthapurramuloo Online

Helmed by Trivikram Srinivas, Ala Vaikunthapurramuloo was a commercial hit that is currently streaming on Netflix. The movie is available in Telugu and Malayalam languages with English/Hindi subtitles on the streaming giant.

So, after Pushpa, will you watch Allu's this film at the cinema halls? Tell us your thoughts in the comment section below.

(The above story first appeared on LatestLY on Jan 18, 2022 03:31 PM IST. For more news and updates on politics, world, sports, entertainment and lifestyle, log on to our website latestly.com).