There are some minor tweaks in Bhramam that otherwise do no affect the main plotline of a pianist pretending to be blind, and finding himself trapped in a murder coverup, involving a yesteryear star and his younger, unfaithful wife. 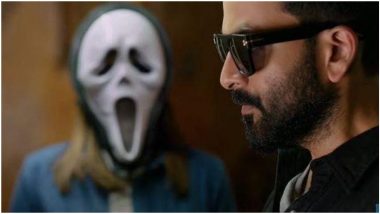 Bhramam, the Malayalam remake of the 2018 Bollywood film Andhadhun, is now out on Amazon Prime Video. Starring Prithviraj Sukumaran and Mamta Mohandas in the lead, the movie also stars Unni Mukundan, Raashi Khanna, Jagadeesh and Shankar Panicker. Bhramam, directed by reputed cinematographer Ravi K Chandran, is a faithful adaptation, with a few modifications to suit the local milieu. Bhramam Movie Review: Prithviraj Sukumaran and Mamta Mohandas’ Remake is a Needless But Faithful Adaptation of AndhaDhun.

(SPOILERS ahead) Be it replacing the hare with a boar, or changing the final fate of the cop character, played here by Unni Mukundan, there are some minor tweaks in Bhramam that otherwise do no affect the main plotline of a pianist pretending to be blind, and finding himself trapped in a murder coverup, involving a yesteryear star and his younger, unfaithful wife.

Even the climax is similar, though there is one slight but interesting tweak about how the film closes on. Read more to find out...

Bhramam follows the same climax narrative as AndhaDhun, where Anna (Raashi Khanna), sees Ray (Prithviraj) two years later, playing jazz in a foreign cafe. He then convinces her to listen to his story, and we get to see what happened in the car with him and the Doctor (Jagadeesh) with Simi (Poornima Jayaram) in the trunk of the former's car.

Ray tries to convince the doctor to let Simi go, but the doctor argues she can not only give him his eyesight back (through cornea transplant) but also make the doctor richer. Simi, however, escapes and injures the doctor before escaping in the car with Ray inside. She later makes him get off the car, but changes her mind and plans to crush him under it. Unfortunately for her, a farmer tries to kill a boar with his gun at the same time, and the boar jumps on her car's windshield, resulting in her crashing the vehicle and killing her instantly. Bhramam: Did You Know Prithviraj Sukumaran’s Thriller Is the Third Sriram Raghavan Film To Be Remade in Malayalam?

Believing his story, Anna asks him why Roy didn't agree to take the eyes of such a criminal who deserved to be punished. Roy claims that he only wants to focus on his music and wants to forgive and forget. He walks away from her and then as the camera follows his legs, we see the walking stick hit an empty can on the street. As the camera then shows up top, there is a hint of a sly grin on Roy's face.

How The Last Scene Differs From the Original

When Ayushmann Khurrana hit the can with his stick in Andhadun, it felt a little more deliberate. We had then more of an inkling that he is once again faking his blindness so that he can be taken seriously as a pianist. So whatever story he told of the accident and how his tormentor died was strongly hinted to be fake and he did take the cornea from her. We are made to believe that he might have pulled off on a Keyser Söze on his ex, by using the rabbit on his stick as a reference point.

Bhramam's ending is more secretive in nature. Since the focus is on the stick, we are not sure if Roy deliberately pushed the can or was it accidental. Even the grin is rather hinted than shown, as if the film wants to confuse the viewer further.

But what would give away his ruse is that how he knew what transpired in Simi's accidental death, since he was blind at the time. It is also inexplicable that Anna had no clue about how Simi died, considering the latter was earlier reported to be drowned in a canal and she is also a high prolific person. If she is killed in a car accident, won't the news cover the accident? And won't they also cover what a blind man is doing on that road in the middle of wilderness all alone?

Since Bhramam begins with the farmer trying to shoot down the boar, it is as if both the movie and its protagonist are colluding to play a sly game in keeping the viewer in the dark.

(The above story first appeared on LatestLY on Oct 08, 2021 08:09 PM IST. For more news and updates on politics, world, sports, entertainment and lifestyle, log on to our website latestly.com).