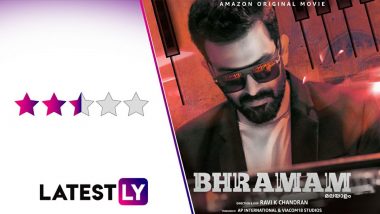 Bhramam Movie Review: Here we go again, sigh! After overcoming the Telugu remake of AndhaDhun in Maestro, now I have to deal with the Malayalam remake for the same film. Save for the "one-inch tall barrier of subtitles", as Parasite director Bong Joon-ho famously put in his Oscar speech, that I had with Maestro, I had no such issue with Bhramam, made in my own mother-tongue. The question here is, what was the need to remake a very popular, quite recent Hindi film, and  then end up not being able to match it, forget bettering it? Bhramam Song Munthiripoovo: Prithviraj Sukumaran and Raashi Khanna’s New Song Will Tug a String in Your Heart.

Okay, let me roll my sleeves and start over on what the plot of Bhramam is about. By now, you would know that the protagonist Ray Mathews (Prithviraj Sukumaran) is a talented pianist, and also a faker, as he lets the world believe that he is blind. Which includes Anna (Raashi Khanna), a cafe owner who is fascinated by his music and him.

Another fan he impresses is Uday Kumar (Shankar), a yesteryear star, married now to a much younger woman and aspiring actress Simi (Mamta Mohandas). Uday invites him to perform at his flat for their wedding anniversary. Ray accepts the invitation and arrives at the flat only to stumble upon a murder.

Bhramam marks the second directorial of the celebrated cinematographer Ravi K Chandran (after Tamil film Yaan). Although he wasn't involved in the making of AndhaDhun (KU Mohanan cranked the camera there), I get it that he was very much impressed with Sriram Raghavan's film. Like many of us!

I also get it his desire to remake it in Malayalam for the local viewers here, but here is a problem the Indian filmmakers don't really get. The target audience for Bhramam would mostly be comprised of the young, urbane audience who would also have happened to watch AndhaDhun. Unless you are bettering the original, all you end doing is inviting needless comparisons.

From my experience of watching Malayalam cinema since my earliest memories, it hasn't been void of remakes. Yes, it took years ahead to come to that realisation, enhanced by my exposure to other language and foreign films, but one thing I must say that there are times Malayalam cinema does remakes better. You can call my statement sacrilegious, but I loved Priyadarshan's remakes of Katha, One Flies Over a Cuckoo's Nest, Stakeout, Class of 84 over the originals. I still adore Thoovalsparsham over Three Men and a Baby or Virus over Contagion any day! 7 Malayalam Movies of Mohanlal, Jayaram, Sreenivasan That Were Remakes but Arguably Better Than the Original.

Unfortunately, Bhramam gives me no such pleasure. Like with Maestro, it is a very faithful adaptation, but as I mentioned in my review for the Telugu remake, a replica, no matter how similar, can't match the same value of an original.

To Bhramam's credit, it tries to do something different occasionally. The opening act, involving the farmer trying to end an animal's menace, is slightly extended to include a cameo from Shine Tom Chacko, for no discernible reason, and replaced the blind hare with a boar. Considering that Kerala fields face more problems from boars than hares, I could say that might be a smart geographical move. Maestro Movie Review: Nithiin, Tamannaah Bhatia’s Thriller Is a Faithful Facsimile of AndhaDhun.

I also liked the idea to name the protagonist as Ray, after the celebrated blind pianist (in case you missed that reference, there is a lingering focus on the Ray poster in the hero's house). This makes us wonder that like his fake blindness, whether we should even trust his name. The rest of the 'smart' additions - Bhramam's attempts to be meta - like having a fake identity named as 'CID Ramdas', or bringing Menaka Suresh to offer eulogy at her former co-star's funeral, merely passes muster. Also its attempts to change certain scenes from how the original tried to depict it - like the intro scene of Unni Mukundan's character or even his final scene - don't really leave the same impact.

Prithviraj, in an interview, said Bhramam is funnier than the original. As someone who have preferred Malayalam comedy over anything else in the world, I would say, not so much. The only time I guffawed was when a character compares Unni Mukundan's character to Bheeman Raghu.

Even the performances are more of a mixed bag. Prithviraj Sukumaran, an otherwise adept actor, is clearly struggling to get into the skin of the character; he just couldn't bring the naughty spirit that Ayushmann Khurrana imbued in the role, and save for a couple of emotional scenes in the second half, feels very much a miscast.Raashi Khanna doesn't get much scope, though the dubbing done for her is decent. Unni Mukundan is stiff in many places. Jagadeesh as the kidney-smuggling doctor is okay.

Mamta Mohandas is the one actor who does better than the rest of the cast, but somehow the movie doesn't allow her to completely unlock the wily, seductive potential of her performance. Shankar leaves an impact in his brief role.

PS: This is the third Sriram Raghavan film to be remade in Malayalam. Rima Kallingal and Fahadh Faasil's 22 Female Kottayam was heavily influenced by Ek Hasina Thi. Johnny Gaddar was terribly remade as Unnam (by the great Sibi Malayil, no less). Wonder if anyone has their eyes trained on Badlapur now?

- Mamta Mohandas to Some Extent

Bhramam might be easily savoured by those Malayali viewers who never got to watch AndhaDhun. Since I don't belong to that domain, the Malayalam remake merely passes muster for me. Bhramam is streaming on Amazon Prime Video.

(The above story first appeared on LatestLY on Oct 07, 2021 01:13 PM IST. For more news and updates on politics, world, sports, entertainment and lifestyle, log on to our website latestly.com).